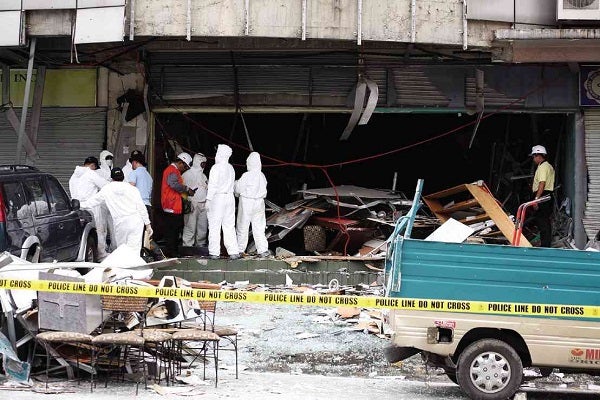 “Boom! It was like a bomb! I thought I was going to die,” said security guard Benito Tinio Jr., recalling the explosion at a commercial building in San Juan City that left him and six others injured around 1 a.m. Saturday.

By daybreak, however, signs pointed to a gas leak as a possible cause of the explosion, with the police noting the absence of any blast crater. Interior Secretary Mar Roxas, who arrived at the scene around 4 a.m., said initial findings showed that the explosion was caused by liquefied petroleum gas.

The damaged areas—which included a seafood restaurant, a noodle house, a laundry shop and a beauty salon—also smelled masangsang (pungent), according to according to Eastern Police District director Chief Supt. Miguel Laurel.

The blast ripped through the ground floor of the two-story building and affected 17 vehicles, including five motorcycles, on Wilson Street. It was strong enough to send Tinio crouching for cover outside a drug store from across the street.

Police said the explosion caused mostly minor injuries except in the case of Jaime Arvin Tacdoro, 22, who suffered burns in the face. He remained under observation at Cardinal Santos Medical Center.

Mauriel, Ras and Tacdoro were inside the seafood restaurant “fixing a pipeline” when the explosion occurred, according to Laurel.

Bomb squad chief SPO1 Bobby Abellanosa said at least six LPG tanks were found in the restaurant’s kitchen. “We can already say it was a gas explosion while waiting for the lab results” on the type of gas involved, he said.