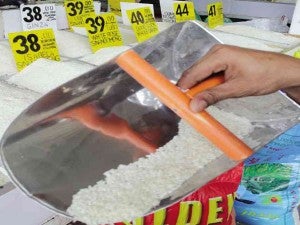 PRICES of rice in Central Mindanao are going up. TONEE DESPOJO/CEBU DAILY NEWS

COTABATO CITY—Mild dry spell and typhoons notwithstanding, Central Mindanao increased its rice production to 535,468 metric tons during the first six months of the year.

Based on data released by the Bureau of Agricultural Statistics (BAS), the figure is nearly 8,900 metric tons more than last year’s rice harvest volume from January to June.

The BAS report said rice farmers in the provinces of Sultan Kudarat, North and South Cotabato and Sarangani, and in the cities within the four provinces managed to increase their palay output, even if the size of farms decreased from 146,220 hectares in 2012 to 145,796 ha this year.

The high production in the first quarter of the year was responsible for the increase, the BAS said.

Amalia Jayag-Datukan, director of Central Mindanao’s regional agriculture office, said the agency is on track in its target of achieving a 130-percent rice self-sufficiency rating by the end of the year.

“Our palay harvest season is now approaching and we’re expecting surplus yield until December,” she said.

From August to September alone, she said a total of 23,179 ha of palay were due for harvest and were expected to yield 94,171 metric tons.

“An additional 43,019 ha with a projected yield of 173,795 metric tons will be harvested from September to October,” Datukan said.

By the end of the year, she said, the region is expected to have produced a conservative estimate of 783,423 metric tons of palay.

The BAS said that if things turned out good, the region could produce more than what was initially expected.

It said that in 2012, Central Mindanao’s total palay output reached 1.27-million metric tons, or a rice sufficiency rating of 128 percent.

During that year, the region ranked fifth among the country’s 17 rice-producing regions in terms of palay yield and accounted for about seven percent of the national harvest of 18.03-million metric tons.

To help achieve the region’s palay production target, Datukan said they have set aside sufficient funds for the distribution of high-quality seeds and the acquisition and construction of more post-harvest facilities. Edwin Fernandez, Inquirer Mindanao