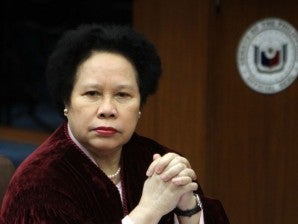 MANILA—Leila De Lima could still function effectively even if the powerful bicameral Commission on Appointments does not confirm her appointment as secretary of justice in light of the current investigation by the Department of Justice and the National Bureau of Investigation of the congressional pork barrel scam and possible prosecution of some members of Congress, Sen. Miriam Defensor Santiago said Friday.

All that De Lima needs is President Aquino’s firm support, Santiago said in a speech at a convention of the Philippine Academy of Rehabilitation Medicine.

“The threshhold question is whether the Department of Justice officials will have the moral courage to stand up to the senators, who can be expected to use the full power of their office to intimidate a mere Cabinet member and other minor bureaucrats,” Santiago said.

“But if the justice secretary has the full backing of President Aquino, she will go ahead and discharge her duty because she could still continue as Cabinet member even if her nomination has been bypassed,” she added.