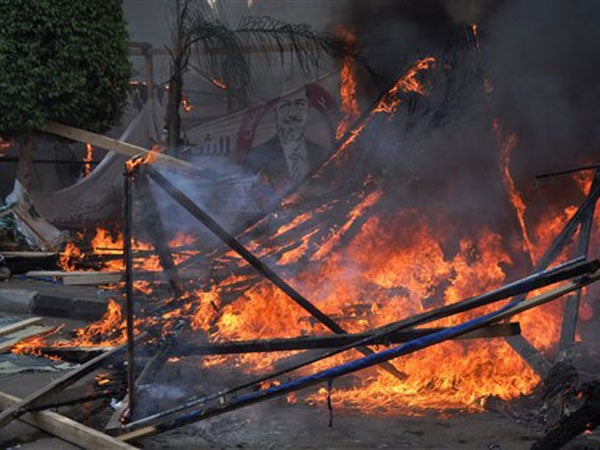 A makeshift hut burns down as Egyptian security forces clear a sit-in camp set up by supporters of ousted Islamist President Mohammed Morsi near Cairo University in Cairo’s Giza district, Egypt, Wednesday, Aug. 14, 2013. Egyptian police in riot gear swept in with armored vehicles and bulldozers Wednesday to clear the sit-in camp and the other encampment set up by supporters of the country’s ousted Islamist president in Cairo, showering protesters with tear gas as the sound of gunfire rang out. AP

CAIRO — Three journalists, including a cameraman for British broadcaster Sky News and a Dubai-based newspaper reporter, were killed and several were injured in the violence that erupted in Egypt on Wednesday.

Media watchdogs urged Egypt to investigate all attacks on journalists and to hold those responsible to account, condemning the casualties that occurred after riot police backed by armored vehicles, bulldozers and helicopters swept away two encampments of supporters of ousted President Mohammed Morsi.

Scores of people were killed in the violence nationwide.

Sky news said Mick Deane, 61, was shot and wounded while covering the violent breakup of protest camps in the capital, Cairo. It said he was treated for his injuries but died soon after. The rest of the Sky crew was unhurt.

The Gulf News, a state-backed newspaper in the United Arab Emirates, reported on its website that journalist Habiba Ahmed Abd Elaziz, 26, was shot dead near the Rabaah al-Adawiya mosque in Cairo as security forces moved in on a sit-in by Morsi supporters.

The newspaper said she had been on annual leave and was not on assignment at the protest for the XPRESS, a sister publication that she worked for.

Egyptian journalist Ahmed Abdel Gawad, who wrote for the state-run newspaper Al Akhbar, was killed while covering the crackdown at Rabaah al-Adawiya. The Egyptian Press Syndicate, a journalist union, confirmed Gawad’s death, though it had no other information about how he was killed.

Sky said Deane had worked for the broadcaster for 15 years in the United States and the Middle East. He was married with two sons.

The broadcaster’s news chief, John Ryley, said Deane was “the very best of cameramen, a brilliant journalist and an inspiring mentor to many at Sky,” while British Prime Minister David Cameron said he was “saddened to hear of the death.”

The Gulf News said it spoke to the UAE journalist’s younger sister Arwa Ramadan, who confirmed her death.

“My mom spoke to her close to (early morning prayers), but when she called again at 12 noon, there was no response,” the sister said. “She called again, and somebody picked up the phone and told her Habiba was dead. My dad, who is in Egypt right now, confirmed it later.”

The Gulf News quoted deputy editor Mazhar Farooqui as saying the publication was in shock.

“It’s hard to believe she’s gone,” Farooqui said. “She was passionate about her work and had a promising career ahead.”

The Committee to Protect Journalists said it was investigating several attacks on journalists and urged Egyptian authorities to “show restraint and allow the media to do their job.”

“We call on Egyptian authorities to issue clear orders to security forces to respect the right of journalists to work freely and safely while covering events in Cairo and the rest of the country,” said Robert Mahoney, deputy director of the media watchdog.

The International Press Institute said it had received reports that journalists were being targeted by both sides in the clashes.

“Journalists are neutral parties in conflicts and should not be the target of violence, regardless of who is perpetrating it,” IPI Executive Director Alison Bethel McKenzie said. “The Egyptian government must also be held accountable by the international community for any deaths or attacks that deliberately targeted media workers.”

Reuters news agency confirmed that photographer Asmaa Waguih had been shot in the foot and is receiving treatment for her bullet wound.

An Associated Press photographer working near the Rabaah al-Adawiya mosque during the melee was hit in the back of the neck by two birdshot pellets, said Manoocher Deghati, the AP’s Middle East photo editor. The photographer received medical care and later returned to work, Deghati added.

Qatar-based broadcaster Al Jazeera said its cameraman Mohammed al-Zaki were shot in the arm and that two of its correspondents were arrested during the day.

Paris-based Reporters Without Borders said it had learned of several other injured Egyptian journalists, including Tarek Abbas — a reporter for the Egyptian newspaper Al-Watan who was sustained gunshot wounds to his leg and eye — and photographer Ahmad Najjar who was shot in the arm and had his camera seized.