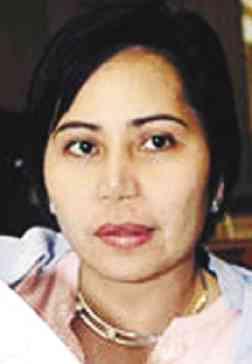 Cristina Decena and son Danilo were unhurt but their 46-year-old housemaid Helen Felesco was wounded by bullet fragments and shattered glass inside a Starex van driven by the younger Decena, which was attacked around 1 p.m. at the corner of Banawe and Simoun Streets, Barangay Matalahib in Sta. Mesa Heights.

Police said the assailants had just come from behind the van on its left side when one of them started shooting. Decena and Felesco ducked for cover while Danilo had the presence of mind to make a sharp turn and hit the gunmen’s motorbike.

The two assailants abandoned their damaged bike, seized a water delivery tricycle that happened to be passing through Banawe and fled toward Manila.

Supt. Osmundo De Guzman, commander of the Quezon City Police District’s La Loma station, said that before commandeering the tricycle, the gunmen also tried to take over a taxi as their getaway vehicle.

The officer ruled out robbery as a motive, saying investigators were looking into the possible involvement of persons who had a personal grudge with Decena.

In 2000, Cristina Decena was romantically involved with Salvador, whom she later sued for estafa. In 2010, the Department of Justice ordered the Makati Prosecutors Office to withdraw the criminal case that she had filed against Salvador and his brother Ramon.

An associate said the businesswoman now uses the surname Castillo since she already had her marriage to Danny Decena annulled, and that she heads the CBC Group of Companies, which includes Cristina Realty.

She also owns a lending firm and a company that sells brand-new and pre-owned designer bags. She earlier owned a rural bank and a school.