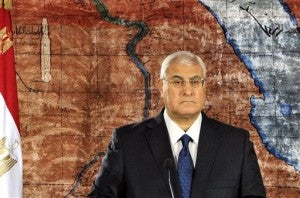 CAIRO — Egypt’s government has slapped a monthlong nighttime curfew on Cairo and 10 provinces.

Wednesday’s decision was announced shortly after interim President Adly Mansour declared a monthlong, nationwide state of emergency and ordered the army to back the police in efforts to restore order.

Violence spread across much of the country after police swept in with armored vehicles, bulldozers and helicopters to clear two encampments of supporters of ousted President Mohammed Morsi. At least 95 people have been killed, many of them in the assaults on the two vigils.

The nighttime curfew affects provinces in southern Egypt where supporters of the Islamist Morsi are strong, like Bani Suef, Assiut and Minya. Christian churches and property in the three provinces have also been the target of attacks.