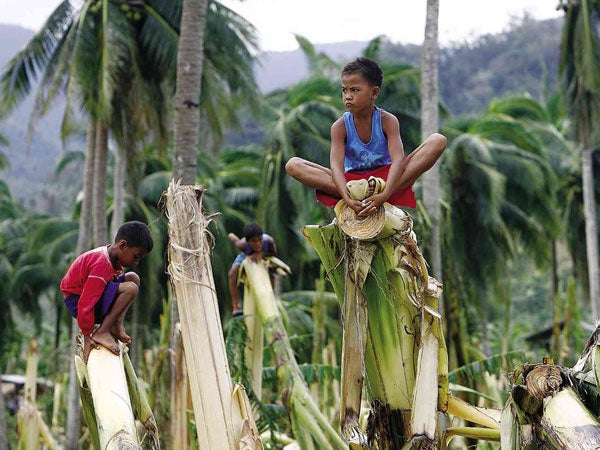 LABUYO’S FURY Boys in Dipaculao town, Aurora, sit on the stumps of banana plants toppled by Typhoon “Labuyo” that ravaged the province on Monday. RAFFY LERMA

The NDRRMC placed damage to crops at P700 million and infrastructure at P116 million.

In Isabela, however, the body of the woman whose hut was swept away by a strong current of the Cagayan River in San Agustin town on Monday was found in Jones town on Tuesday night.

Police said a team of rescuers found the body of Benny Labio, 40, in a river in Barangay Dipangit in Jones at past 11 p.m. Tuesday.

More than 41,000 families have been displaced in 374 barangays in the Ilocos, Cagayan Valley, Central Luzon and Cordillera regions, the NDRMMC said. More than 3,000 families are still in 64 evacuation centers.

A total of 35,615 hectares of corn fields were destroyed in Isabela, Quirino and Nueva Vizcaya, resulting in losses of 26,800 metric tons in potential harvest valued at P315.6 million. The crops have “no chance of recovery,” according to the Department of Agriculture.

The losses threaten projections of a 2.9-percent year-on-year increase in corn output for the second semester. Corn production for July to December was projected by the Bureau of Agricultural Statistics to reach 4.05 million MT.

Overall, the DA estimated damage to corn, rice, banana and other high-value crops at P438.3 million.

Among the provinces in Central Luzon, Aurora has incurred the biggest damage to rice, corn, high-value crops and livestock at P134.7 million.

Labuyo (international name: Utor) struck when most crops were in their growing stages, said Fernando Lorenzo, coordinator of the DA for high value crops.

So far, it has sent 446 bags of rice in relief assistance to provinces in the Ilocos, Cagayan Valley and Central Luzon.

At Ninoy Aquino International Airport (Naia) in Manila, at least four flights to Hong Kong and Macau were canceled Wednesday as the typhoon battered the Chinese territory and nearby areas.