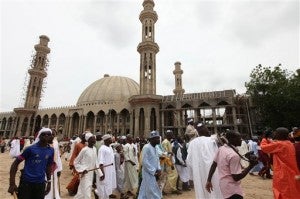 KANO – Suspected Islamist extremists have stormed a mosque and shot dead 44 worshippers, as well as 12 other people, in a nearby village in Nigeria’s restive northeast, officials said on Monday.

The attacks at the weekend were believed to be in revenge over citizen vigilante groups forming to help the military battle Islamist extremist group Boko Haram, which has been waging an insurgency since 2009.

“Gunmen believed to be Boko Haram members entered the mosque and opened fire on Muslim worshippers, killing 44,” a senior government official said on condition of anonymity because he was not authorized to speak publicly of the attack in Konduga on Sunday.

“We believe the attack was not unconnected with the cooperation residents are giving to security operatives in identifying and arresting Boko Haram members in their midst.”

“Boko Haram members came into Ngom village … and shot dead 12 people on Saturday night,” the official said, also on condition of anonymity. He said they were shot at their homes.

Some residents spoke of the attackers in Konduga arriving wearing army camouflage, a tactic they have used in the past to disguise themselves, though those details had not been officially confirmed.

The violence came as Nigeria’s military pursues an offensive in the country’s northeast aimed at ending the insurgency, with a state of emergency declared in the region in May.

In recent weeks, the military has encouraged the formation of vigilante groups to help authorities locate and arrest members of Boko Haram.

The vigilante groups have been credited with reducing the number of attacks, but some have warned that the situation could spiral out of control and lead to further violence.

Boko Haram’s insurgency has left at least 3,600 people dead since 2009, including killings by the security forces, who have been accused of major abuses.

The military has claimed major successes with its offensive, but its version of events is difficult to verify with authorities having cut phone lines in many areas and access to remote locations restricted.

While the number of attacks appears to have declined, violence has nonetheless continued, including three recent deadly school attacks.

In a video obtained by AFP on Monday, Boko Haram leader Abubakar Shekau claimed a series of recent deadly attacks on security forces in the northeast and insisted that he was in “good health” despite the offensive.

The video contained what Shekau claimed was footage of Boko Haram gunmen opening fire on the military in the town of Bama, using heavy weapons mounted on flat-bed trucks.

Shekau also referred to fighting in the towns Baga and Gamboru Ngala near the border with Cameroon.

The Boko Haram leader has been declared a global terrorist by the United States, which in March put a $7 million (5.3 million euros) bounty on his head.

“They are no match for me,” he proclaimed.

Boko Haram has claimed to be fighting for the creation of an Islamic state in Africa’s most populous nation and largest oil producer, though it is believed to have various factions with differing aims.