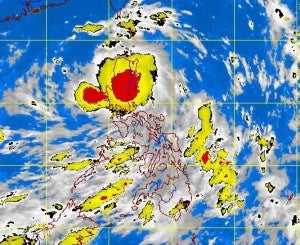 “Labuyo” with maximum sustained winds of 140 kilometers per hour near the center and gusts of up to 170 kilometers per hour was last observed in the vicinity of Baguio City at 10a.m,  the Philippine Atmospheric Geophysical and Astronomical Services Administration said.

Travel is very risky especially by sea and air under Signal No. 3. Disaster preparedness and response agencies/organizations are in action with appropriate response to actual emergency.

Pagasa said there might be widespread disruption of electrical power and communication services under this storm signal. In general, moderate to heavy damage might be experienced, particularly in the agricultural and industrial sectors.

In areas under this storm signal, the winds might bring light to moderate damage to the exposed communities. Disaster preparedness agencies / organizations are in action to alert their communities.

Under this storm signal, only very light or no damage at all might be sustained by the exposed communities. Disaster preparedness is activated to alert status.

Labuyo moved west northwest at 19 kph, and was expected to be at 360 kilometers west of Sinait, Ilocos Sur by Tuesday morning.

Residents in areas with storm signals were alerted of flashfloods and landslides, while areas under Signal No. 3 and 2 were alerted against storm surges.

Fishermen especially those using small seacraft were advised not to venture out into the western and southern seaboards of Southern Luzon and the seaboards of Visayas due to big waves generated by “Labuyo.”