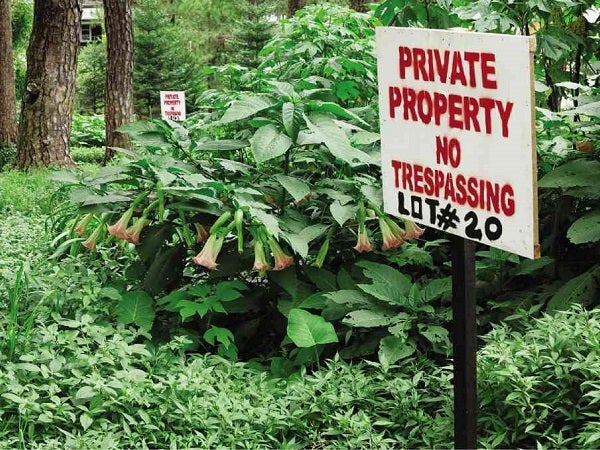 An Ibaloi family puts up sign boards around Wright Park and near lands controlled by the presidential Mansion after the Court of Appeals validated an ancestral land title awarded by the government. EV ESPIRITU/INQUIRER NORTHERN LUZON

BAGUIO CITY, Philippines – City officials discussed the state of Baguio lands on Monday, enraged at reports that a fifth of the summer capital had been titled or claimed as ancestral lands.

Mayor Mauricio Domogan addressed the problem when he spoke before the city council, insisting that some of the ancestral land title holders are false claimants.

The council invited Domogan, officials of the National Commission on Indigenous Peoples (NCIP) and the city environment and natural resources officer (Cenro) to discuss land conflicts with Ibaloi clans, who were awarded certificates of ancestral land titles (CALTs), some covering parks and government forest reservations.

Edgardo Flor, Baguio Cenro, told the council that his agency estimated that a fifth of the city, or more than 1,000 hectares of Baguio’s 57-square-kilometer territory (5,749 ha), had been claimed by indigenous peoples dominated by Ibalois.

The CALTs are issued by the NCIP on the strength of Republic Act No. 8371 (Indigenous Peoples Rights Act of 1997), but ancestral land claims are first inventoried and processed by the Department of Environment and Natural Resources.

In 2002, the Office of the Presidential Adviser on the Peace Process (Opapp) commissioned an inventory and study of Baguio ancestral land claims.

Over 700 indigenous families were profiled, beginning with the large Ibaloi families and the Kankanaey and Kalanguya families, who intermarried with the original clans or acquired land after serving Ibaloi families as workers centuries ago.

The study said many claimants held documents dating back to the early 20th century to prove their ancestors settled in government properties now occupied by institutions like the Philippine Military Academy. It said 374 of 700 claims are within Baguio reservations.

Many of these CALTs are subjects of nullification cases filed by the city government.

Domogan said the city government had asked the courts to void CALTs that encroach on the Forbes Park reservation, Wright Park and Loakan Airport, as well as a CALT that intruded on the reservation of the presidential Mansion and was affirmed by a Court of Appeals ruling in January.

The Opapp inventory lists the Abanag family, which put up signboards around Wright Park to assert its CALT coverage over a popular horseback-riding area, and a government compound belonging to the Mansion reservation.

The Bases Conversion and Development Authority also decided to pursue the nullification of CALTs inside the Camp John Hay reservation, as well as Baguio’s only ancestral domain in Barangay Happy Hallow, which is an Ibaloi-Kankanaey settlement inside the John Hay forest land.

Some Baguio councilors blamed the absence of transparency in processing Baguio CALTs.

Domogan said the CALTs were issued despite legal and land use conflicts raised by the city government at a Baguio ancestral land claimants committee that was formed in 2010.

A primary concern raised at the council session was the fact that CALT holders are allowed by law to sell their ancestral lands, even to people who are not members of their tribe or their families.

Controversy also hounded the first 600 CALT releases by the NCIP during the last days of the administration of former President Joseph Estrada before the Edsa II revolt in 2001. The CALTs were declared midnight titles and were suspended for review.

Bernadette Badecao, NCIP Baguio lawyer, told the council that many of the CALTs within parks and reservations are formal recognition of land rights, but the law states that the families could be indemnified by the government once they relinquished government properties covered by their CALTs.

Councilor Isabelo Cosalan Jr., an Ibaloi, said Ibaloi families are concerned that the latest discussions concerning the CALTs have cast their families as villains in Baguio, an area from which they were displaced when the American colonial government created the city in the early 1900s. Vincent Cabreza, Inquirer Northern Luzon