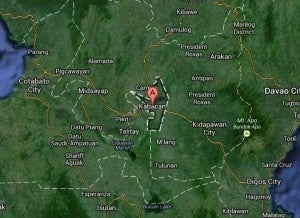 KIDAPAWAN CITY, Philippines—Four people were wounded when a grenade went off outside a house on Rizal Avenue in Kabacan, North Cotabato at 7:30 p.m. Friday.

Initial police investigation revealed that a 40mm grenade ammunition was fired at the residence of Eddie Antolin, a militiaman.

Antolin, his nine-year old son Dzazer Ezekiel, and his in-laws Benjamin and Lucena Ferrer were wounded in the attack.

Police are eyeing personal grudge as a motive behind the attack.