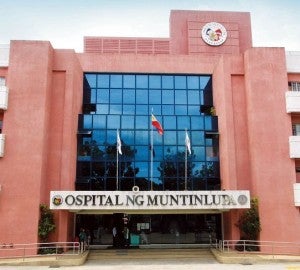 The report, submitted to newly elected Mayor Jaime Fresnedi last August 5, stated that “due for repair” at OsMun were “most of the hospital beds, surgical instruments, endoscopy, X-Ray and other equipment” as well as operating rooms and patient rooms.

“The state of OsMun is truly unbelievable, but we need to work hard and fast to make sure that our hospital is able to meet the needs of our citizens,” Fresnedi said in a separate press statement. “We are working to restore services offered by OsMun, such as subsidies to indigent patients, and to ensure quality health care for all locals.”

“Most of the major services are being operated by suppliers like radiology, laboratory, pulmonary unit, dialysis, dietary, security, hearing unit, animal bite unit and laundry,” the report said, adding that the services offered by these suppliers were “not properly supervised” and accounted for.

The report, a copy of which was furnished to the Inquirer by the Muntinlupa public information office, also revealed a questionable “overinventory” of around 7,000 pieces or P14 million worth of various medical supplies that were supposedly going to waste in the hospital’s stockrooms as of June 30, much of them apparently non-essential.

Ironically, the report stated that the “inventory of pharmacy and needed medical supplies are not sufficient to provide for our patients.”

The Inquirer could not independently verify the claims.

In a phone interview, new OsMun medical director Edwin Dimatatac said the overstocking of certain supplies showed the previous OsMun administration may have “kept purchasing supplies without consulting the end-users,” meaning the doctors

Fresnedi added that in his previous terms as mayor, his administration  offered up to 75 percent hospital subsidy to locals, and partnered with the private sector to ensure quality equipment and supplies.