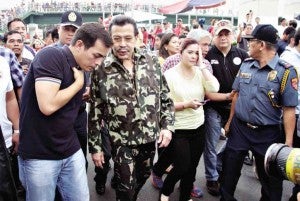 Manila Mayor Joseph Estrada dusted off his military uniform from his Malacañang days when he confronted bus drivers who insisted on entering his city Thursday morning. GRIG C. MONTEGRANDE

He was ready for an all-out war—or at least that’s how it looked like when Joseph Estrada came out in military uniform to confront defiant bus drivers.

Despite the regulation that had been in place in Manila for the past two weeks, several commuter buses tried to enter the city Thursday morning, prompting the former president and now city mayor to personally oversee their impoundment.

Tension rose and traffic slowed down on Quezon Avenue as the buses were flagged down by Manila policemen, whom City Hall mobilized after a group of bus operators with a combined fleet of 700 units threatened to enter the city despite the ban on buses that had no local terminals.

On the street, Estrada talked to lawyer Ferdinand Topacio, counsel for the bus operators. They later agreed to hold a dialogue at City Hall.

The meeting ended on a positive note, with the operators agreeing to cooperate with the city government after the management of the Park N Ride terminal, a private facility offering space to buses without terminals, agreed to lower its fees and simplify the payment scheme.

The bus operators earlier complained that they were being charged excessively by Park N Ride, which was represented in the dialogue by Estelita Javier, vice president for business development.

Speaking to reporters after the meeting, Domagoso said the operators agreed to support the “experimental system implemented by the city government. In exchange for the support, we thank the (Park N Ride) operator for its concession” to lower terminal fees.

“We expect the bus operators to follow our rules and regulations. And we have made a commitment in the near future with regard to bus stops and allowable number of buses,” he said. “At the end of the day, we just need to show that we have a government that is willing to listen and implement the policies.”

“Sa susunod ’wag na kayong mananakot para hindi ko na isusuot ’to (Next time, don’t make a threat so I don’t have to wear this again),” Estrada told the bus operators in jest, referring to his outfit.

Javier explained that from P80, the terminal fee for buses would be lowered to P75 per entry. The new rate will apply to buses coming from Fairview, Quezon City, since they have to go through the terminal twice per trip.

Those coming from the south will only pass through the terminal once and are charged P120 per entry. The fees can be paid on a monthly or weekly basis.