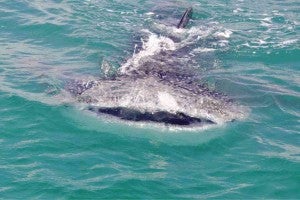 WHALE sharks, also known as “butanding” or “supok,” have been attracting tourists to the coastal town of San Fabian in Pangasinan since May. WILLIE LOMIBAO/CONTRIBUTOR

SAN FABIAN, Pangasinan—Next to the Hundred Islands National Park in Alaminos City, this coastal town is emerging as Pangasinan province’s new ecotourism destination due to the presence of whale sharks near its shorelines.

The whale sharks, locally known as “butanding” or “supok,” have been attracting droves of tourists since May, said Dr. Westly Rosario, chief of the National Integrated Fisheries Technology Development Center in Dagupan City.

“This is the longest time so far that these sea creatures have stayed here,” Rosario said.

Almost every year since 2001, whale sharks have been finding their way to the Lingayen Gulf. But they would leave after two or three weeks, Rosario said.

Four whale sharks were first seen in the waters of this town in May. Last month, their number increased to seven.

“Maybe, they still have plenty of food to eat there,” Rosario said. “There’s a lot of anchovies in the Lingayen Gulf these days.”

He said whale sharks also feed on small fish and shrimps that swarm river mouths, where nutrients coming from rivers upstream are washed out to sea.

Lina Paculan, an employee at Sierra Vista Resort here, said resorts used to have few guests during the rainy months, but now they are still coming in, many of them foreigners. “In fact, our guests now are Russians,” Paculan said.

As soon as they arrive in the resort, Paculan said, they would immediately ask how they can go and see the whale sharks.

Metro Manila-based tour operators have also come up with tour packages that include whale-shark watching here. 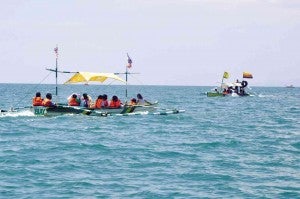 TOURISTS get close to the whale sharks aboard boats in San Fabian. WILLIE LOMIBAO/CONTRIBUTOR

A tour operator, for instance, offered on its website a two-day tour package worth P2,100 from Metro Manila that also included a visit to the Shrine of Our Lady of Manaoag in Manaoag town, which is just a 30-minute ride from here.

Rosario said he could not yet tell for how long the whale sharks would remain in the Lingayen Gulf. But he said that as long as they have food and they will not be harmed, they will stay in the gulf for tourists to see.

A P300-boat ride for five people from the public beach here only takes a five-minute travel to where the whale sharks are swimming, about a kilometer away.

On a week day, at least 10 boats take tourists to the sharks at a time. But on a weekend, the number is double, said Nito Castro, a fisherman turned boat operator.

Tourists, however, could only watch and take photographs or video footage of the whale sharks, unlike in Donsol town in Sorsogon province where they can interact with them aided by a local butanding interaction officer.

Rosario said boat operators here should be taught how to deal with the whale sharks.

“This is a major concern now. We should be proactive by training the people who take tourists to the whale sharks,” he said.

He said in Donsol, the number of whale sharks had decreased from eight to only two in the last six months because of the stress they may have suffered from interacting with tourists.

Rosario earlier warned fishermen not to get too near the sharks to avoid hurting them with the boat’s propellers and outriggers.

“Aside from stress, another factor why many whale sharks left Donsol is the availability of food. So, they leave to look for a place where their food is abundant,” he said.