People of Guinsaugon seek return of IRA, record of existence 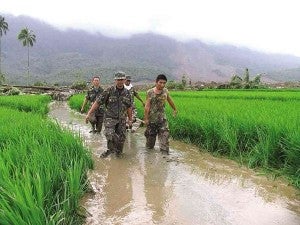 PHOTO taken on Feb. 18, 2006 shows soldiers carrying a body recovered from tons of boulders and mud that buried the village of Guinsaugon along with more than 1,000 of its residents. EDWIN BACASMAS

After half of a mountain collapsed and buried the entire village in 2006, the government also virtually erased from its records the community that once thrived in Guinsaugon, a farming area.

For years, residents of the village who lived through the tragedy and moved to another area were nonexistent as far as government census records are concerned.

Erasing the people of Guinsaugon from government records could have been done as simply as this—census takers visit the landslide site, take a look around and, finding no house standing, write down zero on their population tally forms.

After seven years, the people of Guinsaugon may finally be able to put themselves back in official existence.

A $27,000 donation was given to them to help them build homes, restore farms and make government see that there are people again on what many had thought is now just a graveyard covered by tons of boulders, soil and debris that collapsed on homes and bodies that have never been recovered.

The money would be used, according to village chief Beauty Cabacungan, to resurvey Guinsaugon.

Cabacungan said the donation gave survivors of the landslide, who cling to their identities as the people of Guinsaugon, hope in reclaiming their farms and their IRA, the village’s share in national income.

Cabacungan said while the survivors of the landslide kept returning to the original village site to farm, they had not been allowed to build homes there. She is now asking authorities to allow the people to build even shacks on top of the landslide site.

“Most of us are farmers,” Cabacungan said.

According to Nap Cuaton, the mayor of St. Bernard, the donation came from various sources. The money is being held in trust in bank.

Cuaton said he would seek advice from the Mines and Geosciences Bureau and Department of Interior and Local Government over Cabacungan’s request for the people to be allowed to build houses again where Guinsaugon originally stood.

More than 1,000 people, including more than 200 children trapped in their classrooms, had been buried alive when a portion of Mt. Kan-abag collapsed after several days of heavy rains, sending tons of boulders and soil hurtling down Guinsaugon on Feb. 17, 2006.

Survivors had been transferred to the village of Magbagakay, also in St. Bernard, near the boundary of San Juan town, which refuses to cede jurisdiction over the relocation site, leading to a boundary dispute.