Australian zoo hoping for first panda birth Down Under 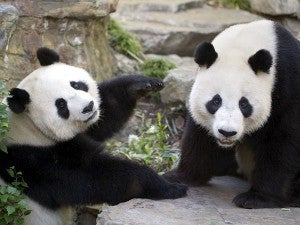 SYDNEY – An Australian zoo said Wednesday it was hoping for the first successful panda birth in the southern hemisphere as it prepares one of its giant animals for artificial insemination.

Adelaide Zoo’s pandas Wang Wang and Funi have failed to conceive naturally in the previous two seasons and the zoo’s veterinarian David McLelland is not taking any chances this time given the very short window of opportunity.

“We are hoping for a natural mating as it is clear our pair are compatible,” he said. “However, young age and inexperience has prevented a successful mating in the two previous breeding seasons.

“Artificial insemination will be used alongside natural breeding attempts and is a vital breeding technique due to pandas’ unique reproductive biology with a very short reproductive window of 48-72 hours.”

McLelland said female panda Funi’s hormones would be monitored to determine the best time for one or more artificial inseminations, which would be led by an expert from the China Conservation and Research Centre for the Giant Panda in Wolong.

“Both Wang Wang and Funi’s activity levels have increased and they’re showing prolonged rutting behaviours (power-walking around the exhibit), scent marking and lots of climbing, especially from Funi,” she said.

“They have also both begun bleating at each other, which is a high pitched contact vocalisation used between pandas during the breeding season.

“In the coming weeks, we expect to see this vocal exchange between the pair increase indicating Funi… will be receptive to Wang Wang’s advances.”

Ever since the pandas arrived in Australia on a decade-long loan from China in late 2009, zookeepers have said they would focus on trying to breed panda cubs – a notoriously difficult task for the low-sexed creatures.

The zoo received Funi and Wang Wang before they reached sexual maturity so they could naturally progress into the southern hemisphere’s breeding season and Davey said even sunlight and the temperature of their enclosure could play a role in determining whether Funi will mate.

Adelaide Zoo said a successful southern hemisphere panda birth would be a world first and help in global efforts to preserve the animal.

China’s then president Hu Jintao offered to loan Wang Wang and Funi to Adelaide Zoo for 10 years when he was in Sydney in 2007 for an Asia-Pacific summit.

Fewer than 1,600 pandas remain in the wild, mainly in China’s Sichuan province, with a further 300 in captivity around the world.

Last month a panda cub was born in Taiwan, while a panda in the United States also gave birth to twins. Both females had undergone artificial insemination.