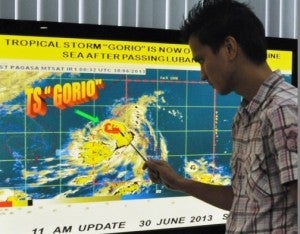 MANILA, Philippines—In the hope that synchronizing clocks will stamp out the Filipino bad habit of tardiness, the nation’s official timekeeper on Wednesday laid out its proposed protocols for the implementation of the law prescribing Philippine standard time, including the provision of fines and other penalties for radio and television stations that fail to synchronize their timepieces.

The Philippine Atmospheric, Geophysical  and Astronomical Services Administration held a public consultation on its implementing rules and regulations for the newly passed Republic Act 10535, or the Philippine Standard Time (PST) Act of 2013.”

That law seeks to synchronize official watches in the public and private sectors through the accurate display and dissemination of the standard time in government agencies, schools, television and radio stations, corporations, and civil society groups.

PST is eight hours ahead of Greenwich Mean Time (GMT+8).

On May 15, President Benigno Aquino signed Republic Act 10535, which sets the standard time in all official sources throughout the country and provide funds for its display, monitoring and dissemination in all public spaces.

“This PST law is a unifying move, as it promotes the value of punctuality to every Filipino and targets time uniformity in all parts of the country,” said Flaviana Hilario, Pagasa’s acting deputy director for research and development.

“Only Pagasa is mandated to set the Philippine Standard Time. Now we can’t give the excuse that we didn’t set the time right. Now we have only one PST and that’s the time set by Pagasa,” she said.

Under the proposed implementing rules and regulations, all national and local government offices shall be required to display the PST on their official time devices, including bundy clocks and on their websites, in accordance with the PST of Pagasa using its network time protocol.

“Their official time devices shall likewise be prominently displayed in areas readily accessible to the employees and to the general public,” according to the IRR.

All TV and radio stations, as well as private corporations, are also encouraged to display and observe the PST.

The law mandates Pagasa’s Time Service Unit to monitor the accuracy of the timekeeping system and the compliance of all concerned TV and radio stations in providing the precise standard time.

In the event of non-compliance, it shall notify the National Telecommunications Commission about violations in monthly progress reports, the IRR states.

The penalty for owners of private TV and radio stations that “unjustifiably fail to calibrate and synchronize their time devices with the PST, ranges from P30,000 to P50,000 for the first offense, and in case of a second offense, revocation and cancellation of their franchises to operate.

The law  mandates schools and government agencies “to conduct a continuing information campaign about the value of time and the need to respect the time of others, in order that the people may realize the imperative of synchronizing the official time.”

It also institutionalizes the “National Time Consciousness Week” every first week of the year. “What better time to learn about the value of time than the first  few days of the year?” Hilario said.