Pateros joins the fray: ‘Fort Bonifacio is ours’ 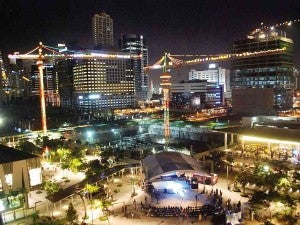 Pateros also claims Fort Bonifacio, part of which has been developed into Bonfacio Global City (in picture).

A third party has joined the dispute over Fort Bonifacio.

“That’s our land they’re fighting over,” declared a former councilor of Pateros, who is leading the municipality’s claim to the Fort Bonifacio and other former military reservations in the area, after the Court of Appeals issued a decision awarding jurisdiction over the area to Makati City.

Dominador Rosales, who filed a petition in court last year claiming that Fort Bonifacio and its surrounding areas originally belonged to Pateros, said the Court of Appeals ruling would not affect the municipality’s claim lodged against the two cities at the Taguig City Regional Trial Court.

Fort Bonifacio is also being claimed by Makati and Taguig cities.

“Our case is very much alive at the Taguig RTC, and these two are separate cases. Whatever happens in the Taguig vs Makati case will not affect in anyway our case here,” Rosales, 71, told the Inquirer in an interview.

“Maybe the case will be advantageous to Pateros’ case because at the end of it, whoever wins the case will be the only opponent in our case. The defendants will be either one of them. Anyway, it’s our land they’re fighting over,” he added.

“Residents of Pateros were really saddened and disappointed at the news of the Court of Appeals ruling, but they shouldn’t be, because our case is still alive,” Rosales said.

However, he expressed concern as the case seemed to have stalled in court over two petitions filed separately by Makati and Taguig, which both asked the court to dismiss Pateros’ case.

The petition also asked the court to compel Makati and Taguig to return to Pateros the revenues they collected over the years since Makati took over the barangay (villages) in 1986 and Fort Bonifacio was placed under Taguig’s jurisdiction in 1992.