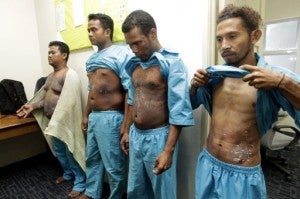 Passengers who were rescued from an overturned boat show their burn wounds at the Maritime office in Tanjung Sedili, Johor, southern Malaysia on Saturday. AFP

KUALA LUMPUR—Rescuers were searching for 40 missing Indonesians including women and children on Saturday after a boat carrying them home to celebrate the end of the Islamic fasting month of Ramadan sank off Malaysia.

Two ships, four speedboats and two helicopters have been dispatched to scour the seas off Malaysia’s southern Johor state to look for the missing, said Amran Daud, an official with the Malaysian Maritime Enforcement Agency (MMEA).

“Our operations are ongoing but we have found nothing yet,” Amran told Agence France-Presse.

The boat, thought to be carrying 44 passengers, sank in heavy seas Thursday night around 13 nautical miles (24 kilometers) off the coast, he said, adding four were rescued on Friday.

It is thought the Indonesians chose to travel on the boat because they were working illegally in Malaysia and wished to bypass border controls on their trip home.

The boat sank roughly three hours into its journey from Tanjung Sedili on the state’s east coast to Indonesia’s Batam island with its passengers hoping to return for Eid al-Fitr, the most important Muslim holiday, Amran said.

“The condition of the boat was believed to be questionable,” Amran said, adding that authorities were still investigating the cause of the wooden boat’s sinking.

Three of the survivors were rescued by passing fishermen, while another was saved by authorities who started search and rescue efforts after being alerted by the fishermen.

“Only four of those on board were rescued by fishermen and MMEA after floating 15 hours in the sea,” Amran said.

Another maritime official, Hairi Nizam, added those rescued were found clinging on to plastic drums in the water. None of them were wearing life jackets.

After being sent to hospital for treatment, the four men, aged between 26 and 31, were in custody while the incident was being investigated, Hairi said.

Shipping accidents off Malaysia’s coast are common as thousands of people from poorer regional neighbours, such as Indonesia and Myanmar, risk journeys in flimsy boats to work illegally in the relatively affluent country.

They fill low-paying jobs shunned by locals on plantations, construction sites and in factories.

Many Indonesians try to leave the country during Ramadan to return home to celebrate Eid al-Fitr with their families. The holiday begins on Thursday.

Authorities said last month they were beefing up patrols to prevent illegal immigrants from making the sea voyage across the waterway separating Malaysia and Indonesia.

Aegile Fernandez, an official with migrant labour rights group Tenaganita, urged authorities to implement “concrete measures” to stop such journeys, such as further stepping up patrols and charging boatmen and any official found taking bribes to allow them.

“It’s been happening year after year, and we have not learned from this lesson… You should not close one eye,” she told AFP. “They (the migrants) are in a very vulnerable situation.”

Malaysia is also a transit point for asylum seekers fleeing unrest in their home countries, such as Myanmar.

Many of them sneak into Malaysia via boat or land and then try to reach Australia in boats via Indonesia in the hope of a better life there.

Australia announced a new policy last month to send asylum-seekers to its Pacific neighbour Papua New Guinea to discourage such journeys after a record number of boatpeople arrived in 2013 — more than 17,300 — and a spate of drownings.

An Indonesian woman died and seven people went missing after their wooden boat overturned in mid-July, also off Johor state and heading to Batam island.

The boat, which was smuggling them out of the country, suffered an engine failure. Twenty-seven Indonesians were rescued.