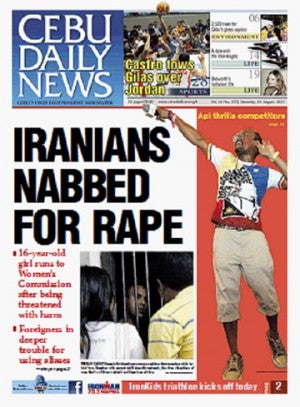 Two Iranians who were accused of rape by a 16-year-old girl found themselves in deeper trouble after they allegedly used aliases when authorities booked them following their arrest in Toledo City on Thursday.

In addition to a rape complaint, Hossein “Alex” Malakooting, 30, and Mohsen “Rizah” Baraghoosh, 38, were charged with violating Republic Act 6085 or the law regulating the use of aliases before the Toledo City Prosecutors’ Office.

Antonio Pagatpat, regional director of the National Bureau of Investigation, said the two Iranians also failed to present documents that would prove that their stay in the country is legal.

A subpoena was sent by the prosecutor’s office to the two Iranians who signed and received the document as “Alex Malacote” and “Rizah Baraghoosh.”

Pagatpat said the two Iranians neither corrected the error nor provide authorities with their real names.

In an interview, the two Iranians said they have been using Alex and Rizah as their nicknames when they arrived in the country. They explained that the names Alex and Rizah are common and easy to understand in the Philippines.

“I have a passport and other documents (to prove that I’m legally staying in the Philippines),” Malakooting said.

The two Iranians also denied raping the 16-year-old girl. Baraghoosh claimed that the victim was his girlfriend.

Baraghoosh said he met the girl two months ago in a hardware store in Toledo City. They exchanged text messages until they allegedly entered into a relationship.

The victim allegedly told Baraghoosh that she doesn’t want to go home and that she insisted on staying with the Iranian.

Malakooting said he too was impleaded by the girl since he and Baraghoosh are friends.

“This is a big deal for me. Everyone knows that I have not committed any mistake,” said Malakooting who spoke to reporters in English and Cebuano.

“Of course, the accusations are not true. The girl simply wants money,” said Malakooting who manages a farm and is said to be into small scale gold mining in Toledo City.

“I don’t know what’s wrong with that girl. Maybe, she thought we have a lot of- money,” he said.

Malakooting said he arrived in the Philippines in 2007 and married a Filipina. Baraghoosh, on the other hand, came to the country last year.

The two Iranians were arrested by an NBI team led by supervising agent Reynaldo Villordon upon the request of the PWC.

The victim claimed that she was threatened by the two Iranians, which prompted her to seek the assistance of the PWC.

The PWC also sought the help of the Bureau of Immigration (BI) and found out that the two Iranians were not registered in the immigration records.

“It was clear that the duo were using unauthorized names to conceal their identity to avoid criminal culpability,” NBI director Pagatpat said.

The 16-year-old girl has been under the custody of the PWC since she stepped forward and sought for help, Vice Gov. Magpale said.

“The victim has been with us since the day we rescued her. She’s with the center, just like the rest of the victims, we will watch over her,” she told reporters.

“I asked her if she wants to go back to school but she told me that she’s watching over the sari-sari store of her aunt,” she added.

According to Magpale, they sought the help of the NBI and the BI to verify the names of the suspects only to find out that these were non-existent.

“We filed a case and in fact there was a warrant but it turned out that they were using false names so when the PWC came back to me, they asked for our next move,” she said.

“I don’t know our next move yet because last time, we only got to file the anti-alias,” she added.

She said all who come to PWC for help are evaluated by their staff before they respond to the case.

Magpale said she personally talked to the girl and believed her account of the complaint.

“Before we assist anybody, we evaluate them first and so I talked to the girl, in my office and of course, we helped her,” she said.

“I don’t know what the setup was but as of the moment, what we really know was that she was sent to the pink room and there was a certification that there were indeed lacerations. Of course, it will still go to the court but what’s important is that we were able to rescue the victim,” she added.