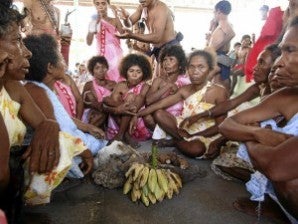 CITY OF SAN FERNANDO, Philippines—An Aeta leader complained that Commission on Elections (Comelec) personnel in Porac, Pampanga, have been discriminating against tribe members who were registering to vote in the Oct. 28 barangay (village) and Sangguniang Kabataan (youth council)  elections.

“They’re the priority, these unat (straight-haired people). Not one of us is being called to register although we have been here for several days now,” said Ronald Popatco, a council member in Barangay Camias.

“Many of them lined up as early as 3 a.m. Others have camped out so they could be first in line. Some students skipped their classes because they have been tired of queueing up for two to three days,” Enriquez said in a text message.

Lizette Mallari, election officer in Porac, denied that Aetas were being treated badly.

“There is no such policy. As long as they are in line, we assist them,” she said.

Mallari confirmed a report by Enriquez about the number of registrants, saying the pace of registration is faster when forms are properly filled up.

An express lane is available for the elderly and people with disabilities, she said.

Paid by a candidate

In Nueva Ecija, a student from a southern town said he was paid by an aspiring candidate for SK chair to seek out and help qualified voters in their village to register to assure the aspiring bet’s victory.

The student said the SK chair hopeful who tapped his service is studying in a university in Metro Manila.

In the five days that he carried out his task, the student said he earned P500 and was entrusted a tricycle that he used to approach registrants on a list provided him. He would then convince them to register and bring them to the Comelec office and back to their houses.

“I was able to convince 19 registrants who agreed to vote later for my would-be candidate for SK chair,” he said.

His two companions also succeeded in meeting their targets and together, they were able to seek out and assist 67 registrants.

“That number was enough to make the SK chair candidate win as there are only 167 voters in the village and four of them are running for SK chair,” the student said.

He said a “contact person” waiting for them in the Comelec compound helped them hasten the registration.

Josephine Galang, San Isidro election officer, said they asked registrants to copy the form because the Comelec did not send additional forms.

She said the forms could also be downloaded from the Comelec website.