'Who am I to judge?' pope says of gay priests | Inquirer News
Close
menu
search

‘Who am I to judge?’ pope says of gay priests 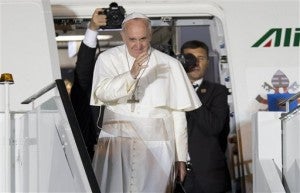 ABOARD THE PAPAL AIRCRAFT—A remarkably candid Pope Francis struck a conciliatory stance toward gays Monday, saying “who am I to judge” when it comes to the sexual orientation of priests.

“We shouldn’t marginalize people for this. They must be integrated into society,” Francis said during an extraordinary 82-minute exchange with reporters aboard his plane returning from his first papal trip, to celebrate World Youth Day in Brazil.

“If someone is gay and he searches for the Lord and has good will, who am I to judge?” the pope asked.

Francis’ first news conference as pope was wide-ranging and open, touching on everything from the greater role he believes women should have in the Catholic Church to the troubled Vatican Bank.

While his predecessor, Pope Benedict XVI, responded to only a few pre-selected questions during his papal trips, Francis did not dodge a single query, even thanking the journalist who asked about reports of a “gay lobby” inside the Vatican and allegations that one of his trusted monsignors was involved in a gay tryst.

Francis said he investigated the allegations against the clergyman according to canon law and found nothing to back them up. He took journalists to task for reporting on the matter, saying it concerned issues of sin, not crimes like sexually abusing children. And when someone sins and confesses, he said, God not only forgives—he forgets.

“We don’t have the right to not forget,” he said.

While the comments did not signal a change in Catholic teaching that homosexual acts are “intrinsically disordered,” they indicated a shift in tone under Francis’ young papacy and an emphasis on a church that is more inclusive and merciful rather than critical and disciplinary.

Francis’ stance contrasted markedly with that of Benedict, who signed a document in 2005 that said men who had deep-rooted homosexual tendencies should not be priests.

Gay leaders were buoyed by Francis’ approach, saying the change in tone was progress in itself, although for some the encouragement was tempered by Francis’ talk of gay clergy’s “sins.”

“Basically, I’m overjoyed at the news,” said Francis DeBernardo, executive director of the US-based New Ways Ministry, a group that promotes justice and reconciliation for gay, lesbian, bisexual and transgender people and the wider church community.

“For decades now, we’ve had nothing but negative comments about gay and lesbian people coming from the Vatican,” DeBernardo said in a telephone interview from Maryland.

The largest US gay rights group, Human Rights Campaign, said in a statement that the pope’s remarks “represent a significant change in tone.”

Still, said Chad Griffin, the HRC president, as long as gays “are told in churches big and small that their lives and their families are disordered and sinful because of how they were born—how God made them—then the church is sending a deeply harmful message.”

In Italy, the country’s first openly gay governor, Nichi Vendola, urged fellow politicians to learn a lesson from the pope.

“I believe that if politics had one-millionth of the capacity to . . . listen that the pope does, it would be better able to help people who suffer,” he said.

Vendola praised the pope for drawing a clear line between homosexuality and pedophilia. “We know that a part of reactionary clerical thought plays on the confusion between these two completely different categories,” he said.

Francis also said he wanted a greater role for women in the church, though he insisted “the door is closed” to ordaining them as priests. In one of his most important speeches in Rio, Francis described the church in feminine terms, saying it would be “sterile” without women.

Funny and candid, Francis’ exchange with the media was exceptional. While Pope John Paul II used to have on-board talks with journalists, he would move about the cabin, chatting with individual reporters so it was hit-or-miss to hear what he said. After Benedict’s maiden foreign voyage, the Vatican insisted that reporters submit questions in advance so the theologian pope could choose three or four he wanted to answer with prepared comments.

Francis did not shy away from controversial topics, including reports suggesting that a group of gay clergymen exert undue influence on Vatican policy. Italian news media reported this year that the allegations of a so-called “gay lobby” contributed to Benedict’s decision to resign.

“A lot is written about this gay lobby. I still haven’t found anyone at the Vatican who has ‘gay’ on his business card,” Francis said, chuckling. “You have to distinguish between the fact that someone is gay and the fact of being in a lobby.”

The term “gay lobby” is bandied about with abandon in the Italian media and is decidedly vague. Interpretations of what it means have ranged from a group of celibate gay priests who are friends, to suggestions that a group of sexually active gay priests use blackmail to exert influence on Vatican decision-making.

Stressing that Catholic teaching calls for homosexuals to be treated with dignity and not marginalized, Francis said he would not condone anyone using private information for blackmail or to exert pressure.

The Rev. James Martin, a Jesuit author and commentator, saw the pope’s remarks as a sign of mercy. “Today Pope Francis has, once again, lived out the Gospel message of compassion for everyone,” he said in an emailed statement.

Speaking in Italian with occasional lapses in his native Spanish, Francis dropped a few nuggets of news:

— He said he is thinking about traveling to the Holy Land next year and is considering invitations from Sri Lanka and the Philippines.

— The planned December 8 canonizations of Popes John Paul II and John XXIII will likely be changed—perhaps until the weekend after Easter—because road conditions in December would be dangerously icy for people from John Paul’s native Poland traveling to the ceremony by bus.

Francis also he solved the mystery that had been circulating since he was pictured boarding the plane to Rio carrying his own black bag, an unusual break with Vatican protocol.

“The keys to the atomic bomb weren’t in it,” Francis quipped, referring to the case that accompanies US presidents with nuclear launch codes. The bag, he said, contained a razor, a prayer book, his agenda and a book on St. Therese of Lisieux, to whom he is particularly devoted.

“It’s normal” to carry a bag when traveling, he said, displaying a simplicity of style that separates him from previous pontiffs, who until a few decades ago were carried around on platforms.

“We have to get used to this being normal.”