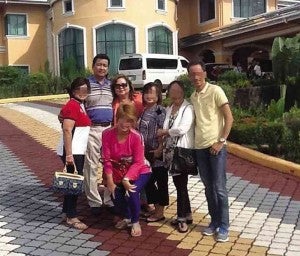 KNOW NO EVIL Sen. Lito Lapid is shown with Victoria Sevilla Tolentino in front of his mansion in Porac, Pampanga province, in this photo posted on Facebook. The faces of the others in the photo have been blurred to protect their privacy. CONTRIBUTED PHOTO

Tolentino, known to her employees by her nickname Marivic, is the general manager of Innsbruck International Trading, the company that received hefty funds from Lapid’s Priority Development Assistance Fund (PDAF) for a supposed antidengue program.

But Lapid, through his chief legal officer, lawyer Filmer Abrajano, denied knowing the company or Tolentino.

Abrajano said neither Lapid nor his office knew the company or had anything to do with the P20-million procurement of “Effective Microwealth Probiotics (EMP),” a garbage deodorizer, from Innsbruck.

In 2011, a portion of Lapid’s PDAF went to the towns of Morong, Pililla, Teresa and Baras, all in Rizal province, and Polillo in Quezon. Each municipality received P5 million used to purchase EMP from Innsbruck.

The solution turned out to be garbage deodorizer—not antidengue solutions.

“How could they not know her? In the Senate, Tolentino hangs out with the staff of Sotto and Lapid. They went together—Tolentino and members of the two senators’ staff— to Hong Kong last year and Tolentino paid for the travel expenses,” said a source, who claimed knowing Tolentino and the company.

‘Close’ to the senator

The source on Monday provided the Inquirer with photos from the Facebook and Instagram accounts of Tolentino’s relatives.

“There were a lot more [photos] but [Tolentino’s] account was deactivated over the weekend,” after the Inquirer published the report about the supposed anomalous transactions, the source said.

But a few happened to stay on the social networking site, including a picture of Lapid and Tolentino at the senator’s Pampanga mansion.

The photo, according to a caption dated July 14, 2013, read: “We were invited to senator Lito Lapid’s house in Porac, Pampanga.” The senator’s statement, denying any connection with the company, was issued just last week.

Another set of photos, from an Instagram account of another relative, showed Tolentino posing with Lapid’s staff at the senator’s office. Tolentino was wearing Easter bunny ears in what appeared to be a Halloween party, as the photo was taken 39 weeks ago.

“They (Lapid and Tolentino) are close,” said the source, who requested anonymity so as not to get involved in the controversy.

The source, however, agreed to a phone interview, “because people finally spoke out,” referring to the earlier Inquirer reports. “I knew all about this but couldn’t speak it out because they have strong ‘connections,’” the source added.

A company profile, provided by the local government unit of Polillo to the Inquirer, said Innsbruck International Trading started its operations in 1995.

It said Innsbruck supplied medical kits, trucks and Hummer spare parts to the Armed Forces of the Philippines, until it shifted to supplying medical equipment in 1998. The company ventured into EMP products, also in 1998, with the local government units in Laguna, Bulacan, Nueva Ecija and Rizal.

“The production cost is low but it seems the markup of the government is really high,” the source said of EMP, which is made of rotten fruits, molasses and sugar.

Tolentino, the source said, “coursed [the contracts] through” Abrajano, for Lapid’s PDAF, and a certain Ma. Nenita “Nette” R. de los Reyes from the office of Sotto.

The business, the source said, allowed Tolentino “to buy a house in the United States and pay for her travels with the senators’ staff.”