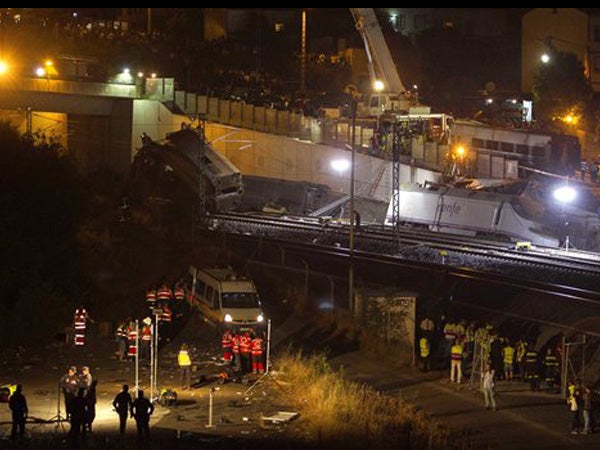 SANTIAGO DE COMPOSTELA — Spanish investigators were trying to determine Thursday why a passenger train jumped the tracks and sent eight cars crashing into each other just before arriving in this northwestern shrine city on the eve of a major Christian religious festival, killing at least 77 people and injuring more than 140.

Seventy-three people were found dead at the scene of the accident and four died in hospitals, said Maria Pardo Rios, spokeswoman for the Galicia region’s main court. At least 141 people were injured — some of them critically — after the eight-carriage train carrying 218 passengers derailed about an hour before sunset Wednesday night.

Authorities did not identify any possible causes of the accident on a pronounced curve just outside Santiago de Compostela, but a spokeswoman with Spain’s Interior Ministry said Thursday that the possibility that the derailment was caused by a terrorist attack had been ruled out. She spoke on condition of anonymity because of the ministry policy.

It was Spain’s deadliest train accident since 1972, when a train collided with a bus in southwestern Spain, killing 86 people and injuring 112. Prime Minister Mariano Rajoy, who was born in Santiago de Compostela, went to the crash scene on Thursday. Officials in the city canceled ceremonies for its annual religious festival that attracts tens of thousands of Christians from around the world.

Rescue workers spent the night searching through smashed cars alongside the tracks, and Pardo said it was possible that the death toll could go higher. A regional Galicia health official, Rocio Mosquera, told reporters at a press conference early Thursday morning that 141 passengers from the train had been treated at area hospitals, with their conditions ranging from light injuries to serious. Some were still in surgery hours after the crash.

As dawn arrived, cranes brought to the scene were used to lift the cars off the tracks and rescue workers were seen collecting passenger luggage and putting it into the back of a truck next to the tracks.

The site itself was a scene of horror immediately after the crash. Smoke billowed from at least one car which caught fire; another broke into two parts. Residents of the urban neighborhood alongside the tracks struggled to help victims out of the toppled cars.

Rescue workers lined up bodies covered in blankets alongside the tracks and some passengers were pulled out of broken windows. Television images showed one man atop a carriage lying on its side, using a pickaxe to try to smash through a window. Residents said other rescuers used rocks.

State-owned train operator Renfe said in a statement an unspecified number of staff were also on board the train during the 8.41 p.m. (1841 GMT) crash on a section of tracks about 2.5 miles (4 kilometers) from Santiago de Compostela that came online two years ago. Spanish media said the train had two conductors aboard and that both survived.

Renfe and track operator Adif were cooperating with a judge who has been appointed to investigate the accident, Renfe said.

Catholic pilgrims converge on the Santiago de Compostela annually to celebrate a festival honoring St. James, the disciple of Jesus whose remains are said to rest in a shrine. The city is the main gathering point for the faithful who make it to the end of the El Camino de Santiago pilgrimage route that has drawn Christians since the Middle Ages.

The accident created a scene that was “Dante-esque,” said Alberto Nunez Feijoo, president of the region of Galicia where Santiago de Compostela is the capital. He declared seven days of mourning to honor the victims.

Several injured passengers said they felt a strong vibration just before the cars jumped the tracks, said Xabier Martinez, a photographer who talked with them after arriving at the scene as rescue workers were removing dozens of bodies.

Passenger Ricardo Montero told the Cadena Ser radio station that “when the train reached that bend it began to flip over, many times, with some carriages ending up on top of others, leaving many people trapped below. We had to get under the carriages to get out.”

Another passenger, Sergio Prego, told Cadena Ser the train “travelled very fast” just before it derailed and the cars flipped upside down, on their sides and into the air.

“I’ve been very lucky because I’m one of the few able to walk out,” he said.

The train, which belongs to the state-owned Renfe, started from Madrid and was scheduled to end its journey at El Ferrol, about 95 kilometers (60 miles) north of Santiago de Compostela. Although it was not one of Spain’s fastest trains called AVEs, it was a relatively luxurious version that uses the same kind of track as Spain’s fastest expresses.

Other major train crashes in Spain over the decades include a 1944 accident on a train traveling from Madrid to the Galicia region that killed 78 people. A subway crash in the southern city of Valencia killed 43 people in 2006 and was blamed on excessive speed. The Madrid train bombings carried out in 2004 killed 191 people.