In the Know: Lorna Kapunan, lawyer of celebrities | Inquirer News

In the Know: Lorna Kapunan, lawyer of celebrities 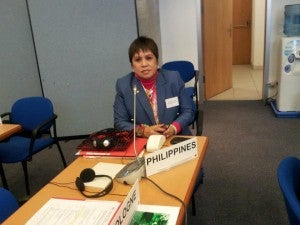 Kapunan is the counsel of James Yap in the basketball star’s battle for visitation rights over his son against estranged wife Kris Aquino.

In May, the Makati Regional Trial Court allowed Yap to visit his son, but he was told to stay away from President Aquino’s celebrity sister and not venture within 100 meters of her.

In December 2011, Kapunan served as counsel to actress Rhian Ramos, who asked a Muntinlupa City court to stop her ex-boyfriend, former TV5 host Mohan “Mo Twister” Gumatay, from further using the media and social networking sites allegedly to defame her.

She also represented a former celebrity doctor, Hayden Kho Jr., who was taken to court by actress Katrina Halili after he allegedly uploaded on the Internet videos of them having sex.

Halili claimed the videos had been taken without her knowledge and consent, but a Pasig court dismissed the case in December 2010 for lack of sufficient evidence against Kho.

Kapunan is also the lawyer of the residents of West Tower Condominium at Barangay Bangkal, Makati City, which had an oil leak traced to a pipeline owned and operated by Lopez-owned First Philippine Industrial Corp. in July 2010.

She likewise represented Alicia “Aleli” Arroyo, the legal wife of the late Negros Occidental Rep. Ignacio “Iggy” Arroyo, in her legal battle against Iggy’s longtime companion, Grace Ibuna, over the lawmaker’s remains and assets upon his death in January 2012.—Inquirer Research