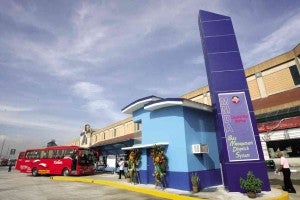 Manila was apparently just the beginning. Soon, government measures to reduce the number of buses on Metro Manila roads will also be felt by commuters entering from the south.

Metropolitan Manila Development Authority (MMDA) Chair Francis Tolentino on Wednesday said a dry run will be held on Thursday for the operation of the P24-million Southwest Interim Transport Terminal (SITT) at the Uniwide reclamation area in Parañaque City.

The new terminal will be for the estimated 1,000 buses coming from Cavite and Batangas provinces.

It is one of the three hubs being set up as ordered by President Aquino to decongest major thoroughfares in the metropolis, particularly Edsa. According to Malacañang, two temporary terminals will be opened near the Trinoma Mall in Quezon City for buses coming from the north, and at the Filinvest area in Alabang, Muntinlupa City, for buses also from the south.

Tolentino said the SITT, which will be formally opened on Aug. 6, can accommodate 955 passenger buses and 326 jeepneys, Asian utility vehicles and taxis.

The MMDA chair said the operation of the SITT would jibe with the newly implemented ordinance in Manila which on Tuesday started barring provincial and city buses from entering if they don’t have terminals within the city.

“The ban (in Manila) will complement the plan of the government to build three centralized terminals on the outskirts of the metropolis,” Tolentino told reporters. “The provincial buses from Cavite and Batangas will stop at the central terminal in Parañaque anyway.”

The SITT test run being conducted Thursday afternoon is meant to familiarize provincial bus operators and drivers with the new system, he said.

In earlier interviews, Tolentino said commuters disembarking at the SITT can take the other public utility vehicles at the terminal to continue their trip to the capital.

The MMDA chief spoke positively of the Manila ordinance even as it continued to pose inconveniences to commuters still adjusting to the ban and drew protests from affected bus operators.

Manila Vice Mayor Francisco Domagoso, the city’s traffic czar, on Thursday said the ban would remain in force and a fine of P500 would be imposed per violator starting today.

“I apologize to those affected by the new city ordinance and I implore them to make the adjustment to start earlier than usual to avoid being late,” Domagoso said.

For in the end, he said, “the commuters will benefit from the bus ban because it will decongest the roads.”