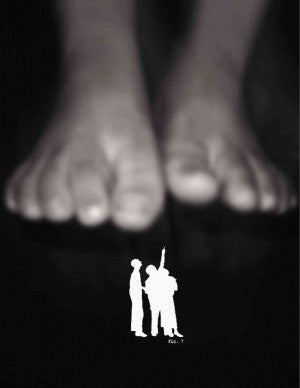 From a university haunted by tragic deaths emerges a collection of poems and prose that hopes to rouse a discourse on the often “unspeakable” realities of self-annihilation, dilemma and death.

“It is dark, obscure and with images that seemed without any connection to the poems,” said Emmanuel Dumlao, one of the authors of “Waylaying Innocence.”

Dumlao, 50, and Dennis Aguinaldo, 34, a fellow professor at University of the Philippines Los Baños (UPLB), launched the collection of 40 poems in English and Filipino at UP Rural High School and UPLB on July 17-19.

“Waylaying Innocence” is a collaboration of poetry and visual art put together by the professors and UPLB students Jesa Perl and Paulin Reyes, who rendered the illustrations.

The images include a vulture, empty school chairs and a graveyard—all in plain black or white silhouette. These are meant “for the readers to make the connection by filling in that void, that absence,” Aguinaldo said.

Aguinaldo went further—even darker—as he talked about the body of works that tackled sensitive cases of students’ suicides and the killings of UPLB students that happened no more than two years ago.

“Female About / Photos Map / Do you know / Kristel? To see /what she shares with” were lines from Aguinaldo’s piece: “Add Friend.”

He described it to be more “avant-garde” in form as it juxtaposed words from the Facebook page of Kristel Tejada, the UP Manila freshman who took her own life after she failed to settle her tuition early this year.

Aguinaldo’s other poem, “(SELF) Application Form,” is based on the UP Student Emergency Loan Fund form, while “Article 330” is lifted text from UP Code’s “no late payment policy” and a Department of Health’s advisory against the use of silver cleaners.

“They were served like sushi, a raw fish cut and cured into a prose,” he said.

Dumlao’s, on the other hand, are rich in metaphors. “Mirasol” uses the image of a sunflower turned away from the sunlight to depict depression.

The other poems hint at the deaths of UPLB students Given Grace Cebanico and Ray Bernard Peñaranda and of high school student Rochelle Geronda, who were killed separately in 2011 and 2012.

“In a community we all thought was nonviolent and without class struggle, we were shocked, enraged and even grieved for the lives lost. But how well did we know the persons? How were we responsible for these deaths?” Aguinaldo posed the questions.

The poets, who shouldered the cost of publication, sold all 500 copies for P75 each. They are now considering reprinting another batch.

They said they did not only intend to raise public awareness but also encourage younger poets.

Unlike the usual book launch, they hopped from classrooms to college student organizations to promote poetry and stir discussions on social issues.

“Poetry itself is the ‘waylayer,’” Dumlao said. “It lurks and attacks the reader’s consciousness when least expected. It shatters his innocence and breaks his comfort zone.”

Read Next
Poll exec sues woman over ‘stupid’ remark vs chaos at listup
EDITORS' PICK
Look Through: Super Typhoon Karding barrels through parts of Philippines
Motorcycles, smartphones, and cash prizes up for grabs in TNT’s ‘Tuloy Ang Saya’ Raffle in Mindanao
Do all the things you do, faster
POGOs not linked to Illegal online gaming, says Pagcor
House energy committee chair Arroyo bats for cheap electricity
Metro Manila now at moderate risk for COVID-19 — DOH
MOST READ
Robredo supporter tackles elephant in room: No massive fraud in 2022 polls, surveys were just right
Comelec invalidates win of sitting governor in Negros Oriental
DepEd: We are in a crisis situation in education sector
Lives destroyed as armyworms invade Philippine ‘onion capital’
Don't miss out on the latest news and information.