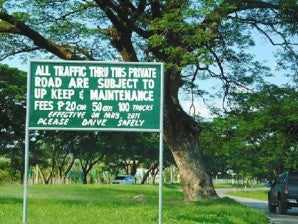 Signages are displayed along a road inside the Hacienda Luisita announcing the collection of a service fee for the road’s upkeep and maintenance. The road links MacArthur Highway to the Subic-Clark-Tarlac Expressway in Tarlac City. PHOTO COURTESY OF BCDA/FILE PHOTO

HACIENDA LUISITA, Philippines—About 812 hectares, or 20 percent, of the portion of this sugar estate covered by agrarian reform had been raffled off by the Department of Agrarian Reform (DAR) through the “tambiolo” (raffle drum) system on the third day of its allocation activity covering two of the hacienda’s 10 villages.

At least 1,231 farmer beneficiaries from the villages of Cutcut and Lourdes have been allocated lots in the sugar estate formerly owned by the family of President Aquino.

But on Tuesday, the Alyansa ng mga Manggagawang Bukid sa Asyenda Luisita (Ambala) asked the Supreme Court to stop the tambiolo system of raffling off the lots. It also asked the DAR to explain why the individual allotment of 6,886.5 square meters per farmer beneficiary, as ruled by the high court in November 2009, had been reduced.

The DAR completed the raffle of farm lots to 645 farmer beneficiaries in Barangay (village) Cutcut and another 586 in Barangay Lourdes.

Much like the scenario in Barangay Cutcut last week, the process in Barangay Lourdes went through smoothly. After going through documentation, beneficiaries gathered in front of a map to see where their respective lots are located.

Even as Estelita Bermudo was happy to have a lot that she can call her own, she was at a loss when asked what she would do with her property.

“Hindi ko raw puwede ibenta hanggang sampung taon at saka dapat daw ako ang magbubungkal. Eh single lang ako at nagkasakit, hindi ko naman kaya magbungkal (I cannot sell my land within 10 years and they told me that I should till the land. I’m single and sickly and I cannot till the land on my own)” said the 65-year-old Bermudo.

This instruction, she said, was clear when she signed the Application to Purchase and Farmer’s Undertaking (APFU) before DAR lawyers.

But Bermudo’s nephew, Bernardo Pineda, also a beneficiary, came to her rescue. “Kami na ang magbubungkal para sa kanya (We will till the land for her),” he said.

Pineda, 42, had worked at the hacienda since he was 15, starting out as a weed clearer, and later, as sugarcane planter.

He said he and 16 of his relatives were given land and they chose to have adjacent lots near the Subic-Clark-Tarlac Expressway (SCTEx).

Thus, 17 names with respective lot assignments are in their common Lot Allocation Certificate (LAC). All told, Pineda’s group has 11.2 ha to till. As to what to plant, Pineda said he and his relatives would meet to discuss and decide on what to do with their land.

Noel Pineda, Lourdes village chief, said he was thankful that the long-drawn-out problem in the sugar estate had been resolved.

Pineda said they were hoping the government would give farm workers financial assistance to help them start anew.

He said the barangay government would ask the National Irrigation Administration to reactivate irrigation in the area so farms will have steady supply of water. Irrigation canals are existing but water needs to be rediverted to the farms, according to Pineda.

Through lawyer Jobert Pahilga, Ambala on Tuesday filed an omnibus motion in the Supreme Court seeking to require the DAR to explain the discrepancy in the number of hectares for distribution to the beneficiaries.

Ambala said the land to be distributed to the farmers should be 4,335.60 ha.

Ambala also asked the high court to appoint a geodetic engineer to validate the survey conducted by the DAR and stop the use of the “tambiolo system” of land distribution.

Ambala asked the court to order the DAR to appoint the farmer’s accounting firm of choice to audit the Hacienda Luisita Inc. (HLI), to determine the financial position of the company.

In asking the Supreme Court to stop the raffle, Ambala said the most ideal way of distributing the land, given its size and the number of beneficiaries, would be through collective ownership.

In a telephone interview, Lito Bais, Ambala and United Luisita Workers Union (Ulwu) chairman, said about 2,000 ha of the sugar estate had been planted by the farmer beneficiaries since 2005 and the area they have been tilling should be given them.

Agrarian Reform Secretary Virgilio de los Reyes said the DAR has been exercising its mandate and could not please everybody.

“We have a mandate to perform and we are doing it. There are the organized and unorganized farmers in the hacienda and we have to go for the most transparent and fairest way to allocate the area. Hindi lang yung maingay ang dapat pakinggan (We should also listen to others, not just the noisy groups),” De los Reyes said.

De los Reyes said he would face the court and answer the petition. “Should the high court set an oral argument, I am prepared to wear my robe. I’m ready to face the case,” he said.

Agrarian Reform Undersecretary Anthony Parungao said the DAR gave the beneficiaries options as to who they want to be with as they allocated the lots.

“They were precisely given the choice of neighbors so they can work collectively while tending their respective farm lots. More than half of the beneficiaries opted for this,” Parungao said.

“As owners, nothing prevents the beneficiaries from doing things collectively and the DAR actually facilitated this by allowing them to choose the people whose farm lots will be beside theirs,” he said.

Parungao said the signing of the APFU was a requirement imposed by law and other guidelines for agrarian reform.

These, he said, would be used as common areas.

Of the 400 ha retained by government, 174 ha are firebreaks which can be used as roads to benefit farmers, according to Parungao.

Parungao, who heads the DAR’s legal affairs division, disputed reports that ULWU and Ambala members refused to participate in the process.

Parungao said 558 of 645 beneficiries signed the APFU and only 87 were absent last week for various reasons.

In Barangay Lourdes, only eight of 586 beneficiaries were absent on Monday.

Parungao said these beneficiaries could go to the Tarlac DAR Office to get their LACs.—With a report from Tonette Orejas, Inquirer Central Luzon