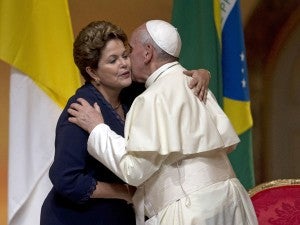 Pope Francis kisses Brazil’s President Dilma Rousseff during a welcome ceremony at Guanabara Palace in Rio de Janeiro, Brazil, Monday, July 22, 2013. Pope Francis returned to his home continent for the first time as pontiff, embarking on a seven-day visit meant to fan the fervor of the faithful around the globe. AP PHOTO/SILVIA IZQUIERDO

RIO DE JANEIRO—Legions of pilgrims packed the streets of Rio de Janeiro to greet Pope Francis on Monday, joyfully swarming his car and chanting his name in a country recently rocked by social unrest.

The 76-year-old Argentine, making his first trip abroad since becoming the first Latin American pontiff, was surrounded by thousands of cheering faithful as he crossed the Brazilian city in the back of a small four-door car and then an open-top jeep.

Despite the heavy security, with 30,000 soldiers and police mobilized, several people were able to stop the pope’s car convoy and touch him through his open window. The pope shook hands and kissed babies.

After massive protests over lagging public services and corruption that regularly ended in violence in recent weeks, authorities wanted to ensure an incident-free visit for the pontiff.

The army said soldiers discovered an explosive device during a training session on Sunday in a bathroom at the Shrine of Our Lady of Aparecida in Sao Paulo state, which the pope will visit on Wednesday.

The home-made device was destroyed and authorities said it was nowhere near the area where the pope or pilgrims will congregate.

Pope Francis came to Brazil, an emerging power with a shrinking Catholic flock, to promote his vision of a more humble Church and to attend World Youth Day, a weeklong event drawing more than one million young Catholics.

Excitement about his first overseas visit brought thousands of people into the streets, chanting “long live the pope,” singing and waving the flags of Argentina and other countries.

The pope, first in his car and then the open-top jeep, waved at the faithful before heading to a meeting with President Dilma Rousseff at the Rio state governor’s palace. He had made authorities nervous by deciding to leave his armored “Popemobile” behind to cross the city.

“I have learned that, to gain access to the Brazilian people, it is necessary to pass through its great heart; so let me knock gently at this door,” Francis said alongside Rousseff.

“I ask permission to come in and spend this week with you. I have neither silver nor gold, but I bring with me the most precious thing given to me: Jesus Christ!”

Outside, hundreds of people protested against the $53 million from public coffers spent on the pope’s visit. Elsewhere in the city, a group of gays and lesbians kissed to protest the Church’s anti-gay marriage stance.

‘Make disciples of all nations’

The pope, meanwhile, urged young Catholics to “go and make disciples of all nations.”

The Church in Brazil, the world’s biggest Catholic country, has seen its following dwindle in the face of growing Evangelical congregations and spreading secularism.

More than 90 percent of Brazilians identified as Catholic in 1970, according to the census. But a poll by Datafolha Institute showed Sunday 57 percent now call themselves Catholic, while 28 percent say they are Pentecostal or non-Pentecostal Evangelicals.

“We hope the pope will bring us the renewal of faith and enthusiasm,” said Renzo Cicroni, a 23-year-old Argentine among the crowds. “To see all these young people together, it re-energizes us.”

Anaia Betarte, a 17-year-old from Uruguay, said she came to “see change, something new, something refreshing.”

The pope’s message of a “poor Church for the poor,” may play well in Brazil, which is now an economic powerhouse but still has millions living in shantytowns like the favelas rising on Rio’s hillsides.

Speaking to reporters on the papal plane, Pope Francis warned against marginalizing the young and the elderly.

“The global crisis has brought nothing good to young people. I saw the data on youth unemployed last week. We run the risk of having a generation without work,” said Francis, who carried his own luggage onto the plane, in keeping with his trademark simplicity.—Laurent Thomet, Jean-Louis de la Vaissiere