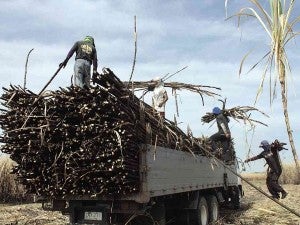 CITY OF SAN FERNANDO, Philippines—Some 300 farm workers from Hacienda Luisita in Tarlac marched to Congress in Quezon City on Monday to demand that President Aquino and his relatives let them have the land awarded to them under the government agrarian reform program for free.

Antonio Flores, secretary general of the Kilusang Magbubukid ng Pilipinas (KMP), said members of the Alyansa ng mga Manggagawang Bukid sa Asyenda Luisita (Ambala), began their march from the Department of Agrarian Reform (DAR) building, also in Quezon City, where they had been encamped since Saturday. The march was timed for Aquino’s State of the Nation Address (Sona) before a joint session of Congress.

In a statement, Flores dubbed as “deceptive” the allocation of Hacienda Luisita lots to its workers via raffle on Thursday. He said this was “all for show” for the Sona.

But some beneficiaries did not seem to mind having to pay for their lots.

DAR Undersecretary for Legal Affairs Anthony Parungao said 114 of the 143 members of the United Luisita Workers Union in Barangay (village) Cutcut signed the Application to Purchase and Farmers’ Undertaking (APFU) while 20 of 51 Ambala members signed the document.

He released the data to dispute a KMP report that 187 beneficiaries refused to join the lot allocation on Thursday. Beneficiaries who failed to sign the APFU on Thursday, he said, could go to the DAR Tarlac office to claim their lot certificates and subscribe to their APFU.

The KMP is demanding “zero compensation” for the 4,099.11 hectares of Hacienda Luisita divided up among over 6,000 worker-beneficiaries, saying the latter had long paid for the land with their labor and the conversion of the land into shares of stock Hacienda Luisita Corp. in 1989.

The Supreme Court through a final resolution in April 2012 ordered that just compensation be paid to the Cojuangco family for the lands whose cost was based on 1989 values.

In Baguio City, around 50 members of the Cordillera Peoples Alliance (CPA) performed a pattong (ritual dance) around a six-foot-tall cardboard “minion” (a character in the movie “Despicable Me”) that was a caricature of President Aquino at a protest rally at Malcolm Square on Monday.

The CPA, which advocates for indigenous peoples rights, said Aquino had failed his midterm grades as President because his policies did not stop big companies from stealing Cordillera resources nor did he prevent military atrocities in the uplands, citing a report by the Cordillera Human Rights Alliance.