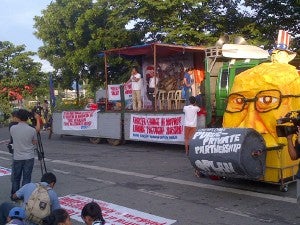 MANILA, Philippines—Protesters began to arrive near Ever Gotesco Commonwealth in Quezon City as early as 5 a.m. Monday when President Benigno Aquino III delivers his fourth State of the Nation Address.

Some 200 protesters from Bagong Alyansang Makabayan Southern Tagalog arrived in the rally zone and started their program at about 6 a.m.

Also on their way near Ever Gotesco were farmers from San Jose del Monte, Bulacan, and Hacienda Luisita belonging to the Kilusang Magbubukid ng Pilipinas.

Some 5,000 policemen from the National Capital Region Police Office were deployed in the Commonwealth Avenue area before 5 a.m.