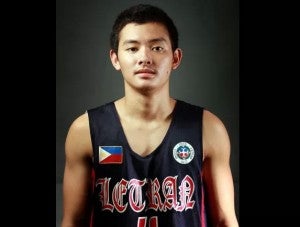 MANILA, Philippines — Letran cager Franz Dysam tried to protect his girlfriend “like a gallant knight” Saturday when unidentified gunmen “riding in tandem” fired at them.

Dysam sustained six gunshot wounds in different parts of his body but Joanne Sordan, who was identified in earlier reports as his wife, did not as the one bullet that hit her proved to be fatal, according to a statement Sunday by the Colegio de San Juan de Letran.

“Franz is conscious and is already aware of the passing of his girlfriend, Joanne. Like a gallant knight, Franz protected his girlfriend during the incident…While only one shot was received by his girlfriend, it was too fatal,” the statement read.

The statement also said that the couple’s three-month-old child, was safe.

The shooting took place at about 7:45 p.m. along N. Domingo Street following a game between Letran and Lyceum, which the Knights won at the San Juan Arena.

Dysam, who remained conscious after the incident, remains stable and “all his vital signs are in good condition,” the statement said.

He is scheduled for an operation on Monday to extract the bullets lodged in his body.

Sordan was declared dead on arrival at the San Juan Medical Center where she and Dysam were first brought after the shooting.

The family of the 24-year-old point guard arrived from Cebu.

No visitors are allowed at the hospital where he was transferred while “two police officers and Letran personal security were already deployed to ensure his safety,” Letran said.

Police investigating the case have a lead but they did not elaborate.

A CCTV footage which captured the incident is with the authorities.

“The Letran community is behind Franz in his rally. All assistance,  including moral and spiritual, is given him. He is consistently being prayed for especially by the Letran priests. Letran officials pray for the speedy recovery of Franz and wish for the fast resolution of the case,” the college also said.