Cebu Pac passengers say they got P100K each; airline mum 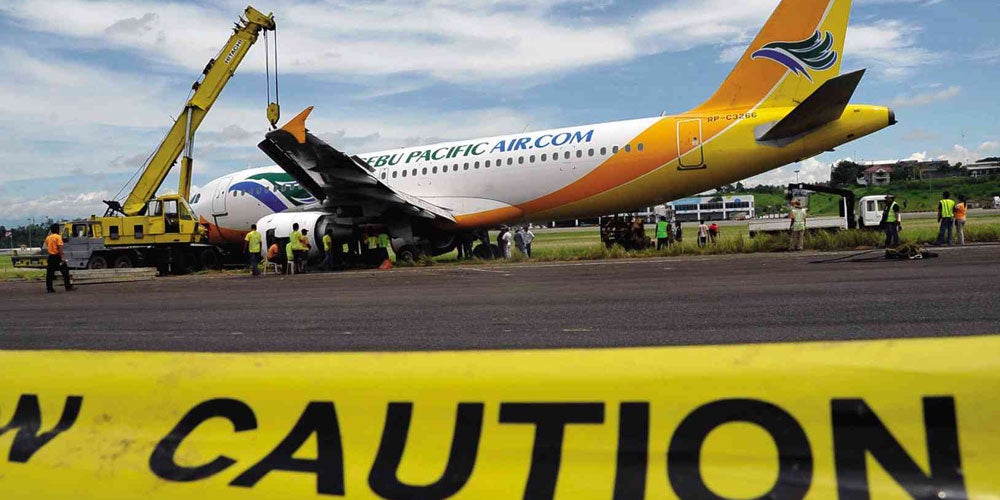 A giant crane tries to lift the grounded Cebu Pacific Airbus from the mud off the runway at Davao International Airport on Tuesday. By nightfall, workers had pulled the plane out and towed it out of the runway. FILE PHOTO

DAVAO CITY, Philippines—Cebu Pacific Air would neither confirm nor deny it had entered into an out-of-court settlement with a group of passengers that was on board its plane that overshot the runway of the airport here on June 2.

The group pursuing compensation from the airline earlier said they received some money but a ranking Cebu Pacific official would not categorically say there had been a settlement.

On Thursday, Robert de Leon, legal counsel of the 42 passengers calling themselves “The Victims,” told reporters here that each of the group’s members received “reasonable compensation.”

Rumors circulating here were to the effect that each of the 42 complainants was awarded P100,000 by the airline.

“I have no details,” Michelle Pestaño-Fojas, Cebu Pacific’s corporate communications manager, told the Inquirer by phone.

But even if she had information, Fojas indicated that she was not ready to tell all, especially to the media.

“The communication to passengers is confidential. We need to respect the privacy of the passengers,” she said.

“We are not allowed to divulge (the amount) out of respect for the agreement we made with Cebu Pacific,” said De Leon, adding that the victims were asked to “keep quiet” upon receiving their compensation.

Andrew Bautista, leader of “The Victims,” said all 42 of them got the money by Wednesday evening.

In a later interview with the local media, De Leon admitted that claims of “psychological injuries” were not enough to be the bases for compensation, “and is potentially unprecedented in our jurisprudence.”

However, he said Bautista’s group was “happy this is finally over” and they commended Cebu Pacific for “its willingness to negotiate and settle” the issue without court intervention.

“The airline’s representatives have listened to our concerns about passenger service and handling and recognized specific points for improvement, and we have also agreed to accept their very reasonable offer of financial assistance to cover passengers’ expenses related to the incident,” said Bautista in a statement.

He said that what was more important than the money they got from the airline was “the respect that Cebu Pacific has given us” because it “is unquantifiable and is worth more than P1 million.”

The group charged that the two pilots and the crew of Flight 5J-971 committed lapses during the incident, such as failing to evacuate them from the stricken plane even as smoke was filling the cabin.

The pilots, investigation by the Civil Aviation Authority of the Philippine (CAAP) showed, committed errors and missed the runway in the process.

The CAAP said the pilots obviously failed to follow the “minimum descent altitude” in landing the plane at the Francisco Bangoy International Airport here.

“It was enough to clear the trauma we experienced,” Bautista added of the money.

As for the other group of passengers led by Ateneo de Davao University professor Jess Delgado, Bautista said he was not aware if they also received some form of compensation from Cebu Pacific.

Delgado had made clear early on that his group, known as “The Survivors,” was not seeking monetary compensation but that a change in the way the airline company handled its passengers in times of crisis and emergencies would be more than enough.

“I really do not know about the other group. What I know from Mr. Lance Gokongwei himself is that they are settling with our group based on what we have negotiated and agreed upon. Anything beyond that is up to those who have other demands, whether or not they will pursue their issue or go to court,” De Leon said.