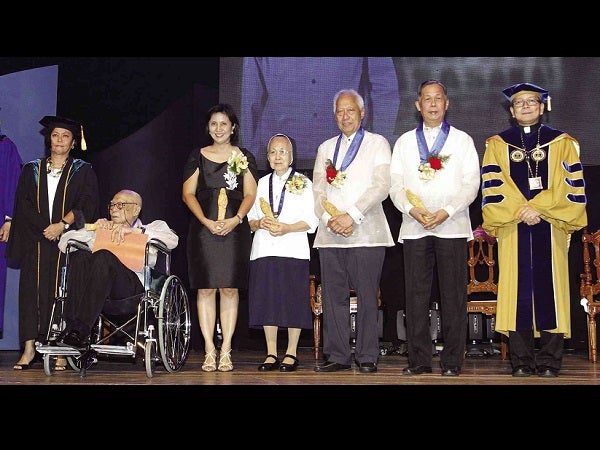 The first and only other time Edmundo F. Nolasco addressed the Ateneo de Manila University community was on March 30, 1949.

The war over, the survivor of the Bataan Death March had stood proudly before the graduating class to deliver the valedictory speech, brimming with what he called the “distinctive Atenean swagger and accent.”

Nolasco, 92, one of the shining lights of the Philippine labor movement, had returned to his alma mater to receive the Lux in Domino (Light in the Lord) Award for his inspired and extraordinary pursuits in the name of social justice.

This time, he maintained a more modest posture, seated in a wheelchair as he spoke, but his presence and his words were perhaps just as commanding as they were in 1949.

“Today, 64 years later, I stand before the Ateneo community once again, no longer a daring and idealistic young man with a distinctive Atenean swagger and accent, but as a daring, idealistic 92-year-old, albeit with a humbler stride, and perhaps more significantly, a humbler accent,” he said to laughter.

By turns humorous, poignant and powerful, Nolasco’s 10-minute acceptance speech brought some of the Ateneans to tears and the entire crowd to its feet in a long and thunderous ovation.

On Tuesday night, Nolasco was recognized during Ateneo’s Traditional University Awards, along with four other distinguished individuals from different disciplines.

The late Jesse Robredo was posthumously given the Government Service Award for being a “true servant leader” as mayor of Naga City of 19 years, and as secretary of the interior and local government, before he died in a plane crash in August 2012.

Accepting the award on his behalf, his widow, Camarines Sur Rep. Leni Robredo, recalled her husband’s sometimes testy relationship with the Jesuit school.

“He always stood by things he felt strongly about, even if it meant locking horns with friends and colleagues. I believe this was one of the reasons my husband was accorded honors this afternoon,” she said, eliciting laughter from the crowd.

“Ateneo is not an institution that teaches blind obedience,” she said. “Ateneo advocates free thinking and devotion to the truth. I guess this is what made Jesse nervous whenever he spoke in front of the Ateneo community. He knew that the words he said would only be accepted without reservations if they were parallel with the various guiding principles each Atenean stood by.”

Electoral reform advocate Christian Monsod was conferred the Parangal Lingkod Sambayanan (Public Service Award) for his contributions in ensuring the integrity of Philippine elections, winning landmark decisions in favor of the farmers of Sumilao and Hacienda Luisita, and his battles for the most marginalized and neglected sectors.

Bukas Palad (Open Palm) Awardee Sr. Michelle Gamboa of the Religious of the Good Shepherd was honored for dedicating 50 years of her religious life “empowering the poor and marginalized, teaching them sustainable agriculture, financial management and other livelihood skills to help them become self-sufficient.”

Writer and historian Resil Mojares received the Gawad Tanglaw ng Lahi (Torch of the Race Award) because of “his distinguished scholarly work and award-winning books on Philippine and Cebuano literature, culture and history [that] have greatly contributed to a deeper understanding of ourselves as a people and as a nation.”

The five were honored in a Special Academic Convocation at Henry Lee Irwin Theater on the Ateneo campus at Loyola Heights in Quezon City.

But the spotlight belonged to Nolasco, who earned the only ovation of the evening.

The son of a doctor and a nurse who served in government hospitals, Nolasco was born in 1921 and grew up in Mindanao “at a time when workers around the world were breaking free from the shackles of an oppressive social system,” Ateneo said of the Lux in Domino recipient.

As a freshman at Ateneo, he was deeply influenced by his Latin teacher, the Jesuit priest Joseph Mulry, a social justice crusader who challenged his students to action on behalf of the poor.

Nolasco’s studies were interrupted by the Second World War. Along with 33 other Reserve Officers’ Training Corps (ROTC) cadets, he volunteered and fought in the trenches of Bataan, becoming both witness and participant to the atrocities of war.

His experience of the war culminated in one of its most infamous episodes, the Bataan Death March of 1942, which claimed the lives of thousands of Filipino and American prisoners of war at the hands of the Japanese on a tortuous 128-kilometer trek from Bataan to Pampanga, and then to Tarlac by box train.

Nolasco escaped by pretending to be the husband of an unaccompanied woman and her child in the town of Pilar in Bataan.

Upon his return to Manila, he landed a job as a messenger-janitor at Cine Gloria in Tondo where he earned P1 a day for 15 hours of backbreaking work, Ateneo said in its profile of Nolasco.

“The experience opened his eyes to the harsh conditions of unorganized workers,” it said.

In 1948, he returned to Ateneo to finish his undergraduate degree and later on enrolled at the Ateneo Law School, where he joined the Social Order Club founded by another Jesuit priest who would become another role model to him, Walter Hogan.

The influences of Mulry and Hogan instilled in the young Nolasco a deep sense of commitment to pursue the ends of social justice.

Of his two teachers, he said: “They are the testimony to the immense power that an inspiring teacher with an inspiring idea holds over young minds in search of meaning for life. I took to heart their slogans: Fight for social justice. Work for the truth. And I decided in my college years, ‘Yes, this is how I will live my life.’”

The first union Nolasco organized was the Cinema Workers Union of the Philippines, which earned him an award as the Most Outstanding Labor Leader in 1957 and the Claro M. Recto Award. The union was also feted as the most outstanding that year.

Later, he served as executive vice president of the Federation of Free Workers (FFW), a Catholic trade union founded by Hogan and envisioned to be “free from government control, free from company domination, free from racketeers and free from communists.”

The group organized workers, including miners, seafarers, sugar farmers and others, and advocated for worker education and waged campaigns for labor laws.

One of its biggest campaigns was the enactment of labor reform laws, with Nolasco at the center of it, as the chair of the political action committee. In May 1953, Republic Act No. 875, the Industrial Peace Act, also known as the Magna Carta of Labor, was passed, and a month later, signed into law.

In 1960, Nolasco left FFW to set up the Industrial Unions Congress, which organized unions for musicians, artists, and cinema and hotel workers.

The labor leader continued his work through the Ferdinand Marcos dictatorship, joining protests and challenging the imposition of martial law. In 1986, he joined the Concerned Seamen of the Philippines and became involved in collective bargaining with domestic and foreign ship owners.

He also took part in the Center for Labor Studies, a nongovernment organization providing legal and technical assistance to unions.

In 2011, the Ateneo de Manila University Press published Nolasco’s “Unyonista: The Chronicles of a Social Justice Crusader,” a 256-page memoir of his life as a labor leader.

Ateneo said Nolasco deserved one of its most prestigious honors for “being a principled and committed crusader for Filipino workers, dedicating more than 50 years of his life to their cause and fighting side by side with them for just compensation and humane work conditions, [and] for embodying the Ignatian spirit of magis in his work on the labor front.”

The Lux in Domino Award is “a capstone award that requires the crowning achievement of both life and work given to an extraordinary individual who has incarnated in life, and perhaps even in death, in an outstanding and exemplary manner, the noblest ideals of the Ateneo de Manila University, the school said.

Recipients of the award are chosen exclusively from the ranks of Ateneo alumni.

To date, only 25 individuals have been conferred the honor since 1986. In accepting the award, Nolasco recalled the last time he addressed the Ateneo community as valedictorian of the class of 1949.

“I remember how I concluded that speech,” he said. “It is customary for every valedictory to thank parents, loved ones and schoolmates for the sacrifices they have made for us. I believe that there can be no greater expression of our gratitude than if we dedicate our lives to change the world for Christ, and if need be, to die fighting for the cause.”

Nolasco said he accepted the award on behalf of the many Ateneo graduates “who have taken the same path and who have worked in quiet and uncelebrated ways, often under challenging circumstances, but always perfectly true to the noblest ideal of being men and women for others.”

He dedicated the honor to his family, his late wife Ella and eight children, including Inquirer managing editor Jose Ma. D. Nolasco, and the Filipino workers, whose cause he had spent his whole life trying to protect.

Nolasco concluded his speech on a triumphant and moving note: “It has been a life lived with passion, with love, and most especially, with purpose and meaning.”

With those words, the Ateneo community rose as one, some of them wiping away tears, to cheer and celebrate one of their own in an ovation that reverberated through the packed hall.