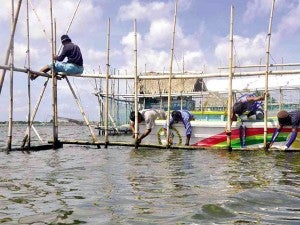 Two teams, consisting of 12 members each and armed with bolos, manually took down the nets and uprooted the bamboo poles that made up the pens, city agriculturist Emma Molina said.

Molina, the task force head, said 10 fish pens were scheduled to be dismantled on Thursday.

She said about 205 pens are found along the Calmay and Dagupan Rivers. The owners of at least 52 of the pens said the area where the structures were built were their property, as these were former fish ponds that were claimed by the river.

Each pen is stocked with thousands of bangus (milkfish), a major product of this city.

Of the 52 owners, Molina said 25 have submitted documents claiming ownership of the areas where the pens were built.

“But we need to validate these claims. The problem, however, is that some land titles are named after their grandparents or relatives. So we are just submitting the documents and it will be up to the city legal officer or administrator to determine whether the structures would be allowed to continue or not,” she said.

At least 11 pens had been dismantled by their owners last week after harvesting their stocks.

Last month, Mayor Belen Fernandez gave the pen owners until Aug. 31 to tear down their structures.

Molina said the structures are pens where stocks had been harvested on July 15.

The structures have been color-coded so the task force could identify them easily. Structures which have titles were assigned blue, those scheduled for harvest on July 15 were assigned orange and the newly stocked pens were assigned yellow.

Molina said the newly stocked pens were given up to the end of August to harvest.

She said her office earlier conducted a profiling of the pens that sprouted in April and May at the height of the election campaign, “when nobody wants to hurt anybody.”

The city’s rivers were cleared of fishing structures in 2010 when then Mayor Benjamin Lim ordered a massive dismantling operation to “allow the city’s rivers to breathe.”

Molina said the process of dismantling the pens was slow.

Ronnie Cayabyab, a task force member, said it takes up to two hours to tear down a pen that could be as big as 100 square meters.

“We will have to manually uproot the bamboo poles, which are driven a meter deep into the river bed,” Cayabyab said.

Molina said she continued to appeal to pen owners not to restock their pens after harvest.

Starting Aug. 1, the task force will dismantle 10 pens a day so that by Aug. 31, the city’s rivers will already be cleared of pens. Yolanda Sotelo and Gabriel Cardinoza, Inquirer Northern Luzon