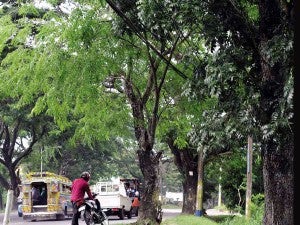 SOME of the trees that were saved in Naga City. JUAN ESCANDOR JR./INQUIRER SOUTHERN LUZON

NAGA CITY—The provincial environment office of Camarines Sur saved more than 600 trees from being cut along Mahalika Highway for a planned road-widening project of the Department of Public Works and Highways (DPWH).

Arnel Rodriguez, provincial environment and natural resources officer (Penro), in a memorandum issued on July 15, said the cutting of the trees, most over 50 years old, “is not the proper solution to traffic congestion along the proposed project area.”

The decision saved 651 trees along 7.9 kilometers of Maharlika Highway, which would have been affected by the P100-million road-widening project from Barangay Mabulo in Naga City to Barangay Palestina, Pili, Camarines Sur.

The DPWH asked the Department of Environment and Natural Resources for permission to cut the trees for the project, which would convert the two-lane Maharlika Highway into four lanes. The national office of the DPWH plans to start the project next year.

Penro suggested instead the conversion of a city road into a national highway for the project.

It said that instead of widening Maharlika Highway, Almeda Highway, which is a city road, could be converted into a national highway and widened.