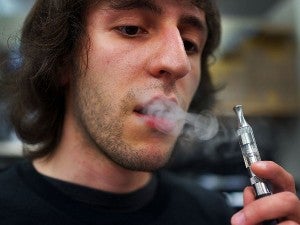 MANILA—The Philippine Medical Association challenged various city governments on Friday to follow the example of Iloilo City which it said has taken a concrete action against the dangers of electronic cigarettes to the health of Filipinos by banning their use in public.

“We praise and thank the people of Iloilo City, led by its dynamic Mayor Jed Patrick Mabilog, for inspiring us to persist in this lonely fight against cigarette smoking, specifically its fancy electronic counterpart,” PMA president Dr. Leo Olarte said.

He noted that the Iloilo City Council amended its Comprehensive Anti-Smoking Ordinance on Thursday to include the battery-operated device in the ban on smoking in public places and transportation.

He encouraged other cities nationwide to also make the same move, saying that “this is a simple case of life and death involving the very health and lives of our people, most especially our children.”

Earlier, the World Health Organization urged all governments to regulate the sale of e-cigarettes as there was no proof that using them was safe and could help people kick the smoking habit.

The WHO said it had data  showing a trend in other countries where people graduated to smoking real cigarettes after using e-cigarettes.

The Food and Drug Administration has also issued advisories warning the public that the electronic smoking device was not emissions-free and contained “volatile organic substances” harmful to one’s health, like propylene glycol and carcinogenic metals like nickel and chromium.

He said his organization had tried to reach Roxas to discuss the matter but the latter seemed unavailable.

“Our FDA lacks enforcers and is dependent on other government agencies like the DILG and local government units to implement its advisories,” he said.

“The longer you postpone action on this crucial issue, the more victims there will be,” he added. “We have exerted efforts to contact our good Secretary Mar Roxas but it seems that he is always busy.”