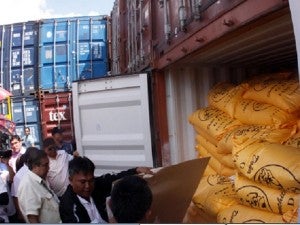 CEBU CITY—Around 100 sacks of smuggled rice kept in container vans at the Cebu International Port container yard have been stolen.

Dela Cuesta said the Cebu Port Authority was in charge of the container yard where the rice was being kept. However, Oscar Lopez, manager of CPA Port Management Department, said that while the gate to the container yard is manned by security guards hired by the CPA, the Customs bureau also has its own security personnel at the gate.

Dela Cuesta said the public auction of the rice should be done as soon as possible.

In a memorandum for Customs Commissioner Rozzano Rufino Biazon dated July 16, Dela Cuesta requested that the forfeited rice be disposed of immediately through public auction in light of the pilferage.

He explained that his request for public auction was without prejudice to the letter of Agriculture Secretary Proceso Alcala to Finance Secretary Cesar Purisima proposing a negotiated sale on an agency-to-agency basis if two conditions would be met.

The conditions are, first, the offered price of $350 per metric ton be increased to $700, and second, the proceeds of the negotiated sale be credited to the Port of Cebu, according to Dela Cuesta.

Dela Cuesta said he has formed a team headed by the Cebu Customs Intelligence and Investigation Service to investigate the pilferage.

He said they also invited representatives from the security agencies of the CIP and the Oriental Port and Allied Services Corp. (Opascor), the company that provides cargo handling and others services at the port, to be members of the investigating team.

The seized imported rice, with an estimated value of P1.2 billion, came from Vietnam and arrived at the Cebu port between March 18 and April 2.

Their winning bid of at least P40 million was higher than the P35-million floor price for 22,574 sacks of rice, which was set by the National Food Authority.

Read Next
PNP chief says initial report on Ozamiz gang leaders’ shooting for submission to Roxas
EDITORS' PICK
DOH: 28,471 new COVID-19 cases in PH; active cases now 284,458
On Day 2 of implementation, gov’t says workers now exempt from ‘no vax, no ride’ policy
Over 3 Million worth of prizes to be won at Smart Padala’s SENDali Manalo Promo!
Acer starts the year off strong with the Aspire Vero National Geographic Edition
Metro Manila posts lowest temperature yet this ‘amihan’ season at 19°C
Gear up and get ready to play with Yamaha Mio Gear
MOST READ
Derek Ramsay on being married to Ellen Adarna: ‘Gumaan ‘yung mundo ko’
Emma Stone calls Andrew Garfield a ‘jerk’ after he ‘lied’ about his ‘Spider-Man: No Way Home’ appearance
Lucky plants to grow in 2022
Retirements prompting major reshuffle in PH military
Don't miss out on the latest news and information.