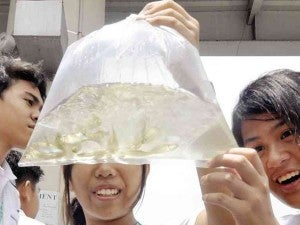 MOSQUITO-EATING FISH Students take part in the release of thousands of mosquito-eating fish in canals on roads near schools in Dagupan City. WILLIE LOMIBAO/CONTRIBUTOR

DAGUPAN CITY, Philippines—Students and marine experts on Wednesday released thousands of “mosquito fish” in canals here to help stop the spread of dengue fever in the city.

The mosquito fish, locally known as “tuyong” and which was introduced to the country in the 1920s to control malaria, feeds on mosquito larvae and can survive in both brackish and fresh water.

“This is where several schools in the city are located, so we chose this area for the launching of the activity,” Rosario said.

Students from the Dagupan City National High School and La Marea Academy joined the activity. Each student was handed a small plastic bag filled with mosquito fish, also called “kataba” and “bubundat,” which were collected from the drainage canals of the NIFTDC, where they have thrived.

Leonard Carbonell, city health officer, said 85 dengue fever cases have been recorded in the city from January to July 17.

“This is a lot lower than the 158 cases in the same period last year. But dengue cases usually peak in the months of August and September,” Carbonell said.

He said no cases of chikungunya have been reported in Dagupan. Both dengue and chikungunya are transmitted by the Aedes aegypti mosquito.

Carbonell said the release of the mosquito fish in the city’s canals complemented the city government’s efforts to protect residents here from mosquito-borne diseases.

He said his office had distributed mosquito traps and chemically-treated nets to public schools that may be used as window screens or curtains in classrooms to kill mosquitoes. It also conducted fogging operations in several villages.

“Of course, the cornerstone of the campaign against dengue is still clean up activities,” Carbonell said, stressing the need to find and destroy breeding areas of mosquitoes.

Rosario said more mosquito fish will be released in the coming days in other areas of the city.

“This is also to make students and residents aware that there is a biological way of controlling disease-carrying mosquitoes,” he said.

Last year, he said, some 200,000 mosquito fish were released in canals in western Pangasinan towns.