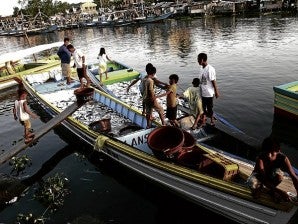 THE CITY of Dagupan in Pangasinan thrives on its reputation as the bangus (milkfish) capital, but a new study from the World Wide Fund for Nature suggests that the proliferation of bangus fishponds has worsened floods and has increased the chances of Dagupan’s sinking. EV ESPIRITU/NORTHERN LUZON

Two teams consisting of 12 members each used bolos (machetes) to manually take down the nets and uproot the bamboo poles that make up the pens.

She said there are about 205 pens on the Calmay and Dagupan rivers. Each pen is stocked with thousands of bangus (milkfish), a fish that has made this city famous.