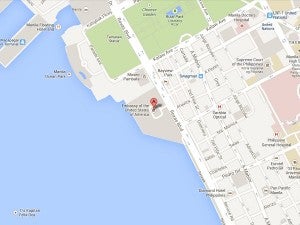 MANILA, Philippines—A man was killed after he was ran over by a vehicle in Manila before dawn Thursday, a city traffic investigator said.

Police Officer 3 Richard Borbon of Manila Police District-Traffic Division said the still unidentified victim died on the spot after he was hit by a Toyota Tamaraw UV Express on the northbound lane of Roxas Boulevard in front of the US Embassy in Manila around 5 a.m.

The victim, estimated to be around 40 to 45 years old, was wearing denimn jeans and blue polo shirt, standing 5’2” in height, with fair complexion.

“Malakas talaga ang pagkabangga sa kanya (He was really hit hard),” Borbon said, noting that the UV Express might have been running too fast based on the 10-meter skid mark seen in the area.

He said the driver possibly tried to stop the vehicle, but still hit the victim.

Quoting witnesses, the investigator also said the suspect went down his vehicle to look at the person he hit, but left after seeing that the victim looked like a scavenger.

“We still don’t know if he was really a scavenger or not, but his feet weren’t that dirty,” he said, “although he was carrying plastics and two bags with clothes in it.”

Pieces of broken glasses were also seen in the area, which may have come from the vehicle’s head lights.