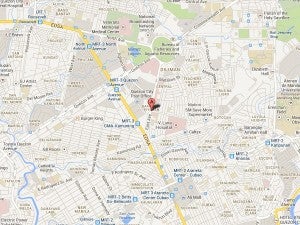 MANILA, Philippines—A woman was injured after being hit by a taxi in while crossing a street in Quezon City early Thursday, the Metropolitan Manila Development Authority officer said.

The taxi driver sped away after hiting Daisy Bernardo, 52, on East Avenue-V. Luna in Quezon City around 5:04 a.m., said Emma Loristo of the MMDA-Metrobase.

Bernardo sustained a fracture in her arms, and a laceration, Loristo said. She was rushed to the East Avenue Medical Center.

A concerned citizen on board a motorcycle tried to chase the taxi, but failed, according to a radio report.