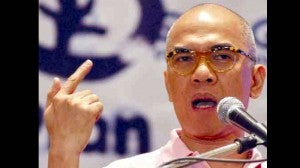 MANILA, Philippines—Depicted in the media as a ruthless criminal, Ricky Cadavero had one last wish before he met his bloody end: to speak with his mother and his supposed ninong (godfather), popular TV host Boy Abunda.

Cadavero, who police claimed was the leader of the notorious Ozamiz robbery group, briefly spoke with members of the media after he and his supposed henchman, Wilfredo Panogalinga Jr., were presented to Interior Secretary Mar Roxas and other police officials at Camp Crame on Monday.

Garbed in an orange prison shirt, the convicted gang leader visibly looked frightened as he was being led by his jail guards to a waiting van of the Bureau of Corrections

“I want to call my mother. I also want to speak with my ninong Boy Abunda,” he told reporters.

Cadavero also asked members of the media to tell the Commission on Human Rights to closely monitor his case, saying he may be harmed by his jail guards at New Bilibid Prison (NBP) in Muntinlupa City, from where he escaped last December.

He said it would be safe for him if he would be locked up at the Calabarzon police office in Camp Vicente Lim in Calamba City.

“It’s OK for me to serve time in prison. But my jail guards would only hurt me. I may be sent to solitary confinement,” Cadavero said in Filipino.

Hours later, he and Panogalinga were killed in what police claimed was a botched rescue mission carried out by their fellow gang members in San Pedro, Laguna province.

“Kambal (Cadavero) is a hardened criminal. He had killed his victims in cold blood even without provocation,” a police official told the Inquirer.

The Philippine National Police said Cadavero’s group was behind the string of robbery incidents in shopping malls and money changers in Metro Manila.

Seven months after his escape, police cornered him in his safe house in Dasmariñas City, Cavite, last Friday.