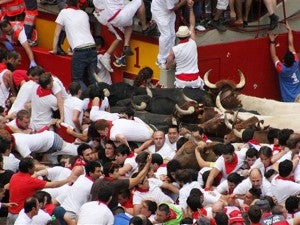 Photo: Runners trip and fall ahead of the bulls blocking the entrance to the bullring during the running of the bulls of the San Fermin festival, in Pamplona, Spain, Saturday, July 13, 2013. A total of 21 persons have been injured, two by gorings, as thousands of daredevils raced through the crowded streets of Pamplona in a hair-raising running of the bulls that ended in a crush on Saturday. (AP Photo/Joseba Etxeberria)

PAMPLONA, Spain  — The penultimate bull run of Spain’s San Fermin festival left at least 23 people injured Saturday, when thrill-seekers fleeing the beasts were crushed at the narrow entrance to the bullring, officials said. An American citizen from Ohio was one of two runners gored.

As the huge animals thundered into the entrance of the tunnel, they were blocked by a mound of dozens of people who had fallen and were piled on top of one other.

One bull that had fallen before the entrance got up and charged into the clogged passageway. Two steers jumped over the pile of people as they began to get up and flee.

“I felt anguish and helplessness for the people trapped there, not knowing how to get out,” said Jesus Lecumberri, 20, a student with several years’ experience running at Pamplona and other bull-running festivals.

Lecumberri said he had charged in to the entrance alongside the first bull, but saw the pileup and quickly dived into a ground-level hatch built into the passage specifically to provide an escape route from situations like this.

A gate normally used to let regional police into ringside positions had been accidentally pushed wide open by a flood of runners, causing an obstruction for others trying to enter the main arena, Interior Ministry regional spokesman Javier Morras said.

“We all know that alley is a funnel and a critically dangerous point at the entrance to the ring,” Morras said. “Pileups there are one of the biggest risks that can occur in the running of the bulls,” he said.

The blockage ended after attendants managed to let the beasts escape through a side door normally reserved for matadors.

Javier Sesma, a health spokesman for Navarra province, said two of the 23 injured people were gored by bulls and that the others were hurt in the stampede.

Sesma said one runner, a 19-year-old Spaniard from Vitoria city, was seriously injured when his thorax was crushed, causing him to stop breathing at the bull ring entrance. An Irish citizen also had problems breathing because of the weight of people on top of him.

“His situation remains very grave, but he appears to be evolving favorably,” Sesma said of the Spaniard. “We are hopeful. His life was at risk, but he is now more stable.”

The American gored Saturday is a 35-year-old from Cleveland, Ohio, who is being identified only by the initials I.L., hospital officials said. A 19-year-old Spaniard from the city of Azpeitia was gored in an armpit during the 928-yard (850-meter) dash through Pamplona’s narrow streets, a statement said.

The American was undergoing surgery Saturday afternoon after suffering a “rectal perforation,” the Navarra government, which organizes the annual festivities, said in a statement.

One of those gored had received treatment in one of the two operating rooms at the bullring, Sesma said. The rest of the injured sustained cuts and bruises.

Sesma said one spectator had a heart attack while watching the stampede. By late afternoon, 16 of the injured had been discharged from hospitalization, Sesma said.

On Friday, the festival drew widespread attention when an American college student and two Spaniards were gored, and videos and photos of the attacks were seen around the world.

The American patient, 20-year-old Patrick Eccles, a student at the University of Utah, was said to be improving in a hospital Saturday. “He is evolving favorably but, logically, has had a severe goring and is still weak,” hospital spokeswoman Marta Borruel said.

Javier Solano, a San Fermin expert working for national broadcaster TVE, said the first recorded pileup happened in 1878, and that two such blockages — in 1975 and 1977 — had led to several deaths.

The number of revelers attending the festival tends to swell at weekends, causing the narrow streets of Pamplona to be thronged with runners, increasing the risk of pileups and injuries.

The festival in this northern city dates back to the late 16th century and also is known for its all-night street parties.

The runs, eight in all, are the highlight of a nine-day street festival to honor Pamplona’s patron saint, San Fermin.

Each morning, six fighting bulls and six bell-tinkling steers that try to keep the beasts together head from stables to the ring where matadors will star in late afternoon bullfights.

The festivities, which end Sunday, were made famous by Ernest Hemingway’s 1926 novel “The Sun Also Rises.”

The fiesta attracts tens of thousands of young people, many from abroad, eager to mix alcohol with the adrenaline of running alongside the massive bulls at 8 o’clock every morning.

Dozens of people are injured each year, with gorings often producing the most dramatic injuries.

The last fatal goring happened in 2009.