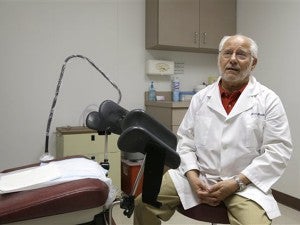 Dr. Howard Novick discusses Texas abortion restrictions at his Houston office Tuesday, July 9, 2013. The new abortion restrictions passed by the Texas Legislature could force Novick to close the Houston abortion clinic he opened in 1980 because, he says, he does not have $1 million to $1.5 million to convert his run-of-the-mill medical office into a fully loaded surgical center with wide corridors and sophisticated air-flow systems. (AP Photo/Pat Sullivan)

HOUSTON — Dr. Howard Novick winces as he recalls treating two and three women a week for infections and complications from botched abortions. It was the early 1970s, before the procedure was legalized, and the experience persuaded him to devote his life to this area of medicine.

Now, more than 40 years later, new abortion restrictions passed by the Texas Legislature could force Novick to close the Houston abortion clinic he opened in 1980 because, he says, he does not have $1 million to $1.5 million to convert his run-of-the-mill medical office into a fully loaded surgical center with wide corridors and sophisticated air-flow systems.

“I have saved some women’s lives. They are so grateful we’re here for them and nonjudgmental,” Novick said. “I really feel a kinship for this.”

The legislation, passed early Saturday following weeks of mass protests and a high-profile filibuster, allows abortions only in surgical centers, requires doctors who perform them to have admitting privileges at nearby hospitals, dictates when abortion pills are taken and bans abortions after 20 weeks unless the woman’s life is in imminent danger.

Abortion-rights advocates argue the costs associated with converting clinics into surgical centers are so high they will force more than 35 clinics to close, possibly leaving only a handful of facilities across the vast state. In rural areas such as the farthest reaches of West Texas or the Rio Grande Valley, that could put the closest facility 300 or more miles away.

The law could also create a backlog so great in the remaining clinics that women seeking abortions will miss the 20-week deadline, said Amy Hagstrom Miller, president and CEO of Whole Woman’s Health, a company that runs five clinics in Texas.

Abortion opponents insist, however, that the new rules are designed to guarantee the best health care.

“All we’re asking for is better surgical care for women seeking these procedures,” said Christine Melchor, executive director of the Houston Coalition for Life.

Lt. Gov. David Dewhurst posted on Twitter a link to a map of facilities that would be affected and implied that any shutdowns would be an added benefit. The timeline for closures isn’t immediately clear; opponents have vowed to sue to block the regulations from going into effect.

Texas already has stringent abortion laws. Two years ago, the Legislature passed a rule requiring women to get a vaginal ultrasound and a full explanation from the treating physician 24 hours before an abortion. Opponents of that rule say it adds travel costs to the expense of the procedure, and in some cases means women also have to stay overnight.

For Melissa Bradshaw, all of it seems absurd. She spent the past year going through a bitter divorce and readjusting her children to a new life. An unplanned pregnancy was the last straw. So after heart-wrenching deliberation, she decided to terminate the pregnancy, calling Novick’s AAA Concerned Women’s Center in Houston just as Texas lawmakers held an angry debate over the new restrictions.

“Your mind is made up when you pick up the phone to call … nobody feels good about it,” Bradshaw said, noting the desperation women or teenage girls often feel.

The new requirements may not survive a court challenge. They conflict with the 1973 U.S. Supreme Court ruling that established a woman’s right to get an abortion until her fetus could viably survive outside the womb at about 22 to 24 weeks of pregnancy.

Federal courts have already struck down parts of similar laws in other states.

Novick says the law is medically unnecessary. The Texas Medical Association, the Texas Hospital Association and the American College of Obstetrics and Gynecology agree.

“It’s been years and years since we had to send someone to a hospital,” Novick said of his clinic.

For Houston, though, the bigger problem may be that its two remaining surgical centers will have to treat women from areas that will no longer have their own clinic.

Rochelle Tafolla, a spokeswoman for the Planned Parenthood Center for Choice in Houston, said between the travel, the 24-hour waiting period and the lack of available clinics, the 20-week deadline could create time constraints.

“I don’t think it’s unreasonable to think that it’s going to have a significant impact on when women can get the care that they need,” she said.

About 72,500 abortions are performed annually in Texas, according to the state Health Department. The busiest clinics do up to 4,000 a year. Now the remaining surgical centers will have to conduct about 14,400 each year.

Some, such as the four-bed facility Hagstrom Miller runs in San Antonio, cannot accommodate those numbers.

“With more restrictions, we see more abortions happening later in the pregnancy,” she said, adding that since the 24-hour waiting period was implemented, more terminations occur in the second trimester, and now some may miss the 20-week timeline. “It happens already.”

The situation will be most dire for women in remote areas, she said.

In McAllen in the Rio Grande Valley, Hagstrom Miller said she will likely close her clinic because architects have estimated it would cost $1.4 million to retrofit a 4,000-square-foot facility to meet all the requirements that come with transforming it into a surgical center. Since the clinic across is not large enough, she would have to move. To build a new facility would cost $3 million, she said.

Women treated under the soft-lighting in the purple rooms in the McAllen clinic already face significant challenges, said Andrea Ferrigno, Whole Woman’s Health director of service excellence. They struggle to pay and to arrange for transportation, childcare and days off from work.

After the 24-hour waiting period was instituted, the facility saw a spike in women trying to end their own pregnancies by purchasing prescription drugs at Mexican pharmacies across the border, Ferrigno said.

“I’m pretty sure we’re going to see a lot more of that,” she said.