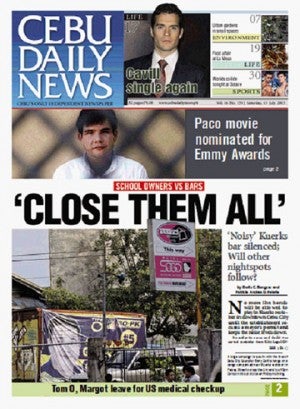 No more live bands will be allowed to play in Kuerks restobar in downtown Cebu City until the establishment secures a mayor’s permit and keeps the noise levels down.

An order to cease and desist was served yesterday from City Legal Officer Jerome Castillo.

He said residents have complained about the “unbearable noise” of live bands playing late at night with “loud sounds emanating from speakers/ baffles.”

He gave the management 72 hours to justify why a “unilateral and summary closure” should not be made by City Hall, which earlier computed unpaid taxes of almost half a million.

Kuerks, a mini-carnival or ‘peryahan’ and other nighstpots in the area have been the subject of complaints from officials of nearby schools who want them shut down because they sell and serve liquor to students, including minors.

“We would be very happy if they close all of them,” said Fr. Anthony Salas, vice president for academic affairs of the University of San Carlos – Main Campus, which is located across the street from where Kuerks is located.

“We received reports about students going to school drunk, skipping classes because they choose to go to these bars,” said Fr. Salas.

Fr. Salas said that even before the Sunday dawn incident where an all-night drinking session ended up in a brawl among young male customers in the parking lot, injuring a 16-year-old high school student who was allegedly struck in the head by Cebu City Councilor Gerardo Carillo, the school had written to City Hall complaining about bars near the university like Kuerks, Knockbox and Dark Planet.

Several bars continue to operate in violation of Ordinance 1413 which prohibits establishments from serving liquor within 100 meters from a residential area or schools.

Fr. Salas said he went to Knockbox about 2 p.m. last Thursday to see for himself if alcoholic drinks were served to minors.

“Students were there wearing their uniforms and IDs. I even ordered a bottle of beer while wearing my school ID, and they (servers) simply handed me one,” he said.

USC’s most recent letter of complaint to City Hall was sent last October. NO action was taken.

They were only furnished a copy of the investigation results by City Treasurer’s Office (CTO) inspectors last month in response to a letter of complaint against Kuerks sent by Jose Marie Gochangco of GV Tower Hotel who was upset by the noise of live bands playing loudly.

Fr. Salas said he welcomes City Hall’s action on Gochangco’s complaint about the noise even if the university’s letters about liquor sales were not acted on.

Augusto Go, president of the University of Cebu, whose main campus is a block away from Kuerks and other bars in barangay Kamagayan shared USC’s lament.

He said a few years ago, he visited a bar along Osmeña Boulevard to ask its owner to stop serving liquor to UC students.

Under Cebu City Ordinance 1413, business establishments cannot sell alcoholic beverages within 100 meters from the perimeter of a school, church or hospital.

Before 2010, special permits were granted for as long as the establishment only sells liquor to individuals above 21 years old and only after 7 p.m on school days.

However, Mayor Michael Rama stopped granting these special permits, which means that all establishments selling alcoholic beverages near schools today are operating without a liquor license.

Under the student manual of USC, students who enter the campus under the influence of alcohol, are seen drunk and manifest unruly behavior outside, will be punished with “permanent exclusion” on the first offense.

This also applies to students caught drinking in their school uniforms inside or outside the campus.

Permanent exclusion “means they will no longer be admitted in our school and will be advised to transfer,” said Fr. Salas. UC, on the other hand, has sanctions that range from suspension to expulsion.

“We will investigate the situation first and penalize depending on the gravity of the offense,” said Joseph Subong, Student Affairs Office Head of UC.

Go said that in order to keep students from spending their free time in harmful activities outside, they should be engaged in activities on campus.

“Schools should have libraries, they should have a venue to play chess, pingpong, other diversions.”

The school officials lamented that no matter how they train and discipline their students, their efforts will always be useless with temptations around.

“We try to mold our students and teach them good values but it is so difficult especially when society does not cooperate. Their parents think they are in school but they are actually in these bars,” said Fr. Salas.

Salas also complained about the loud noise from bars across the university.

The USC’s Law Building, which holds classes until 9 p.m. is directly in front of Kuerks.

“At around 8 p.m. they start playing loud music, sometimes from live bands, which really distracts the students.”

Security is also a concern, he said, since most cases of snatching and fistfights occur in the bars or nearby areas.

“These bars make the environment no longer conducive for learning. They have to respect our institution which has been here for a long time already. We will really laud the city if they close all of them,” said Fr. Salas.

In the July 11 cease-and-desist notice sent to Kuerks, the Cebu City Legal office said the order was for “your strict compliance.”

“It has been reported to us that your establishment creates loud sounds emanating from speaker/baffles (live band) during late hours of the night. Also, several residents in the area has been complaining against your establishment for unbearable noise,” said Castillo’s notice, which mentioned that the “subject of the complaint was confirmed.”

The notice was sent on Thursday afternoon but there was no one to receive it at the bar. It was delivered again last night by personnel of the City Treasurer’s Office.

Kuerks management has three days or until Monday to comment on the show cause order.

The notice said Kuerks was found operating without a mayor’s business permit for 2013.

“We wish to remind you that your subsequent payment of business taxes and the issuance of a (2012) Business Permit does not authorize you the holding of a live and open-air band in your area considering that this is a violation of the Anti-Noise Ordinance of Cebu City,” Castillo’s notice added.

Castillo told reporters “due process” has to be followed by issuing a show-cause order for the establishment to give its side.

“I would like to stress that this is not the first time that a show cause order was issued to an establishment.  Under the Local Government Code, the mayor has the power to serve notice in the implementation of city ordinances,” he said.