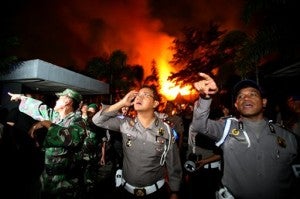 Police officers and soldiers give orders to others as they are deployed outside Tanjung Gusta prison that was partially set ablaze by inmates during a prison riot in Medan, North Sumatra, Indonesia, Thursday, July 11, 2013. About 150 prisoners have reportedly escaped from the overcrowded prison in western Indonesia following a riot triggered by a power outage. AP Photo/Binsar Bakkara

MEDAN, Indonesia—Security forces regained control of a crowded prison Friday in western Indonesia where inmates set fires and started a deadly riot that left five people dead and hundreds of prisoners, including convicted terrorists, on the loose, officials said.

About 500 policemen and 300 soldiers have been deployed around Tanjung Gusta prison in Medan, the capital of North Sumatra, where the riot broke out Thursday night while fire brigades were battling the fires.

“The situation is fully under control after soldiers managed to enter the prison without resistance,” said Akbar Hadi, spokesman for the prison directorate.

Hundreds of other policemen have blocked roads linking Medan to the provinces of Aceh, Jambi and West Sumatra while searching for about 240 prisoners who escaped following the riot at the facility in the nation’s third-largest city.

Two prison employees were trapped and killed in an office building that was burned by prisoners during the riot, which appeared to have been triggered by a power blackout that knocked out water pumps, leaving inmates without water since Thursday morning.

Another employee was injured, Hadi said.

The facility holds nearly 2,600 prisoners while its normal capacity is 1,054, Hadi said. That includes 22 convicted of terrorist acts.

Medan, home to more than 2 million people, is Indonesia’s third largest city in economy and development after Jakarta and Surabaya.

Witnesses said gunshots were heard from inside the prison Thursday night, and television footage showed security forces carrying a white body bag into an ambulance from the burning prison. The fire sent raging orange flames jumping several meters (yards) into the air and a huge column of black smoke billowed over the jail.

Hadi estimated that about 500 inmates had resisted calls to stop the rioting before security forces retook the prison.

Vice Minister of Justice Denny Indrayana, who is in Medan overseeing the operation, appealed to those who escaped to give themselves up to the police.