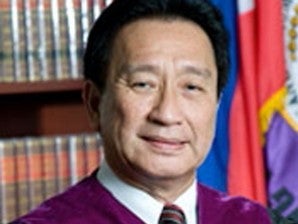 MANILA, Philippines—Supreme Court Associate Justice Presbitero Velasco Jr. on Friday branded as baseless the allegation that he used his influence so that his son could win a seat in Congress.

“The allegation that he ‘wielded his influence’ is baseless and malicious,” Velasco said in a statement sent through his staff, Atty. Theresa Genevieve N. Co.

Velasco issued the statement after Marinduque Representative Reginal Ongsiako-Reyes accused Velasco of using his position so that his son, Lord Allan Jay who ran against Reyes, could get a favorable decision from the high court.

Reyes was recently unseated by the Commission on Elections (Comelec) as representative of the lone district of Marinduque. The Comelec ruling came after the high court affirmed Comelec’s earlier ruling disqualifying her to run for office for being allegedly a US citizen. With the ruling, Lord Allan Jay Velasco will assume the congressional seat in Marinduque.

“I beseech [Associate Justice] Presbitero Velasco to stop using his post to further the interest of his family. I call on him to refrain from using his unelected post to give life to another constitutional crisis,” Reyes had said in a press conference.

In his statement, Velasco pointed that he has inhibited himself from the case even if his son is not a party to the petition filed by Reyes that questioned the Comelec ruling.

“Being a lawyer and an officer of the court, Atty. Reyes should have been circumspect in her statements,” Velasco said.