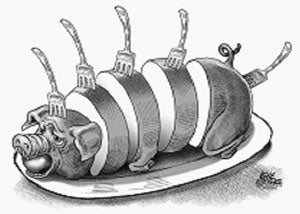 One could excuse Talisay City Mayor Johnny “JVR” delos Reyes for mistakenly offering to give a P1 million pork barrel for every city councilor, regardless of political affiliation, from his P5 million intelligence fund as mayor.

It’s his first time to rule over a city.

With 12 city councilors, the fund would have been inadequate, not to mention an inappropriate source for the sundry needs of constitutents seeking aid for coffins, blood transfusions, medicine, etc.

Auditors would have gone after his neck if the intelligence fund was not used for urgent matters of public order and security.

Per advice from his “team of experts”, Mayor Delos Reyes clarified that the P1 million allotment would come from the city’s 20 percent development fund.

That would be a much larger source, given Talisay’s annual budget of P582.1 million for 2013, on which the 20 percent would be based.

Then again, he should closely study legal requirements for the use of the 20-percent development fund based on guidelines spelled out not only by the Department of Interior and Local Government (DILG) but also by the Commission on Audit and the Department of Budget and Management.

Based on a memorandum issued by the late DILG Secretary Jesse Robredo, the 20-percent development fund can be used for socio-economic and environmental development projects.

Robredo allowed for flexibility by stating that it can also cover expenses related to the implementation of projects like labor costs, repair and rehabilitation following complaints from local officials about the stringent rules for allocation of these funds.

The flexibility was to allow local government units to responsibly use the funds and make it more responsive to needs arising from disasters as well as urban greening and reforestation projects.

These were some of the projects earlier pursued by barangay captains of Cebu City who were each awarded fat pork barrels by former mayor Tomas Osmeña. He, too, expected them to use them well.

Look at how that turned out. Barangay projects for flood control like a wall riprap in the river of barangay Kalunasan was made with substandard materials. Many similar projects were awarded to only one happy contractor.

We admire delos Reyes’ generosity and effort to be fair to all councilors out of concern with the multitude of requests they face from ordinary citizens.

It’s a politically mature gesture that ensures the cooperation of a City Council where his Liberal Party friends are outnumbered. But as the new father of Talisay city, delos Reyes should study well his limits and powers to use public funds.