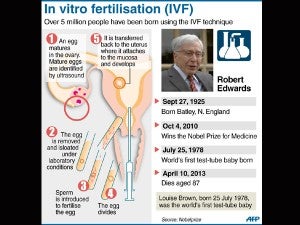 IVF, the process whereby a human egg is fertilized with sperm in the laboratory, is a hit-and-miss affair, with only about 30 percent of fertilized embryos resulting in pregnancy after implantation.

The reason for the high failure rate is not clear but genetic defects are the prime suspects, according to the authors of the paper presented Monday at a meeting in London of the European Society of Human Reproduction and Embryology (ESHRE).

It provides millions of fragments of DNA from a single cell which are then sequenced by a computer.

The method has started being used in genetic research and diagnostics, but not yet in embryo screening, according to Wells.

“Many of the embryos produced during infertility treatments have no chance of becoming a baby because they carry lethal genetic abnormalities,” he said in a statement.

“Next generation sequencing improves our ability to detect these abnormalities and helps us identify the embryos with the best chances of producing a viable pregnancy.”

“The new method should allow costs to be reduced by several hundred pounds, potentially bringing the benefits of chromosome screening within the reach of a far greater number of patients,” he told AFP.

Wells had tested the method on “abnormal” embryos in the laboratory until he was satisfied of a high level of accuracy, then used it to help two couples undergoing IVF.

The mothers were aged 35 and 39, and one had previously had a miscarriage.

Wells said the method identified three healthy blastocysts (early embryos) in one couple and two in the other.

A single embryo was transferred to each woman, leading to healthy pregnancies in both cases, said the statement.

“The first pregnancy ended with the delivery of a healthy boy in June” in Pennsylvania.

The second mother “will be delivering soon,” said Wells.

Further tests will be carried out later this year.